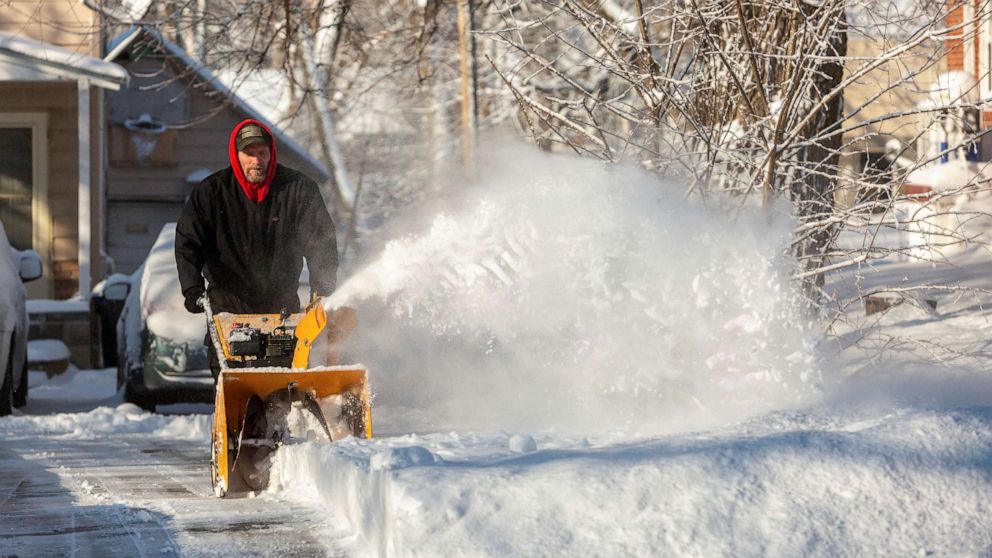 Some 75 million Americans in 33 states, from the Dakotas to Georgia to Maine, are under alert Saturday through Monday for a massive winter storm and chilling temperatures.

At least 11 winter weather alerts and advisories are in effect, including a wind chill advisory for much of the Northeast, where wind chills — what temperature it feels like — were as low as minus 40 degrees F early Saturday.

A winter storm watch also is in effect from Arkansas to Pennsylvania for a much-anticipated winter storm that’s already dumped more than a foot of snow across North Dakota and Iowa.

As the storm heads southeast toward the mid-Mississippi states Saturday into Sunday, and then toward the Northeast Sunday into Monday, more snow, ice and rain are expected.

The interior Northeast up through New England is expected to get hit with 6 to 18 inches of snow. Coastal areas of the Northeast, including Washington, D.C., Philadelphia, New York City and Boston, could see up to 3 inches of snow, though that will likely get washed away as the snow changes to rain by early Monday.

Dangerous road conditions, as well as power outages, are expected throughout the holiday weekend. The Interstate 95 corridor will likely see a wintry mix of rain, snow and ice Sunday into Monday.

“This storm’s a menace,” the governor said during a press briefing Saturday. “As much as a foot of snow’s expected to fall in the mountains and foothills. And in central North Carolina, freezing rain and sleet on top of some snow will fall. The eastern part of our state expects heavy rain and flash flooding, plus high winds and gust.”

In preparation, 10,000 workers from Duke Energy are being activated to help restore power. The company is estimating that 750,000 customers in North and South Carolina could lose power due to the storm and warned customers Saturday to “prepare for possible multi-day power outages.”

The state has also activated 200 National Guard members to assist with the transportation needs in western and central counties.

Boyette warned of likely delays in response times due to the widespread impact of the storm across the state, as well as labor shortages due to COVID-19.

“Travel could be greatly impacted for several days after the storm,” he said, urging people to stay off the roads. “We will do everything we can to reopen roads as quickly as possible.”

In Georgia, Gov. Brian Kemp said agencies are preparing to mobilize and deploy resources as needed in the state, as well as to aid neighboring states if needed.

Atlanta also is preparing for snow, with Mayor Andre Dickens telling Elwyn Lopez of “Good Morning America”: “We have 40 pieces of equipment that’s ready to go. We have 300 employees. Gallons and gallons of brine. So we’re trying to stay ahead of it.”