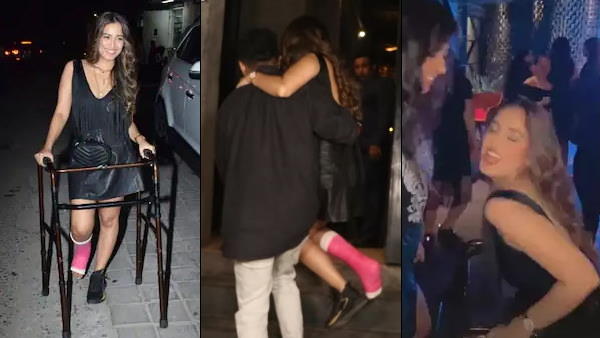 Arrived at the party with the help of Walker

TV actress Srishti Rode arrived at Ankita’s bachelor party for her friends on Tuesday night with Medical Walker. She got out of the car and started walking, then on the stairs when a friend picked her up in her lap, she went inside.

Srishti danced Ankita with Walker at the party. In the photos shared by Srishti Rode, who arrived at the party wearing a black outfit, she is seen dancing to the songs ‘Dilbar’ and ‘Drizzleby Baby’ in her Instagram stories. During this time he also had a lot of fun with Ankita.

Nia took a picture of herself sitting on a chair, her undergarments were visible, went viral

In the pictures that have come out, the actress Srishti Rode’s leg is clearly visible with plaster and she is not even able to keep this foot on the ground. However, despite the injury, she was happy to be in the party. Along with Medical Walker, Srishti has also clicked a lot of pictures after leaving the party. Meanwhile, Srishti said that sometimes it becomes necessary to party. I was so bored sitting at home that I had to leave today.

Is Shah Rukh still afraid of Aryan? Why did I have to make this request to the director?

Many heroines arrived at the party

Photos and videos of Ankita Lokhande’s bachelor party are going viral on social media. Many TV heroines arrived at his party. Apart from Srishti Rode, Rashmi Desai, Aparna Dixit and Mrinalini Tyagi were also present in the party.

Ankita and Vicky have been in a relationship for a long time.