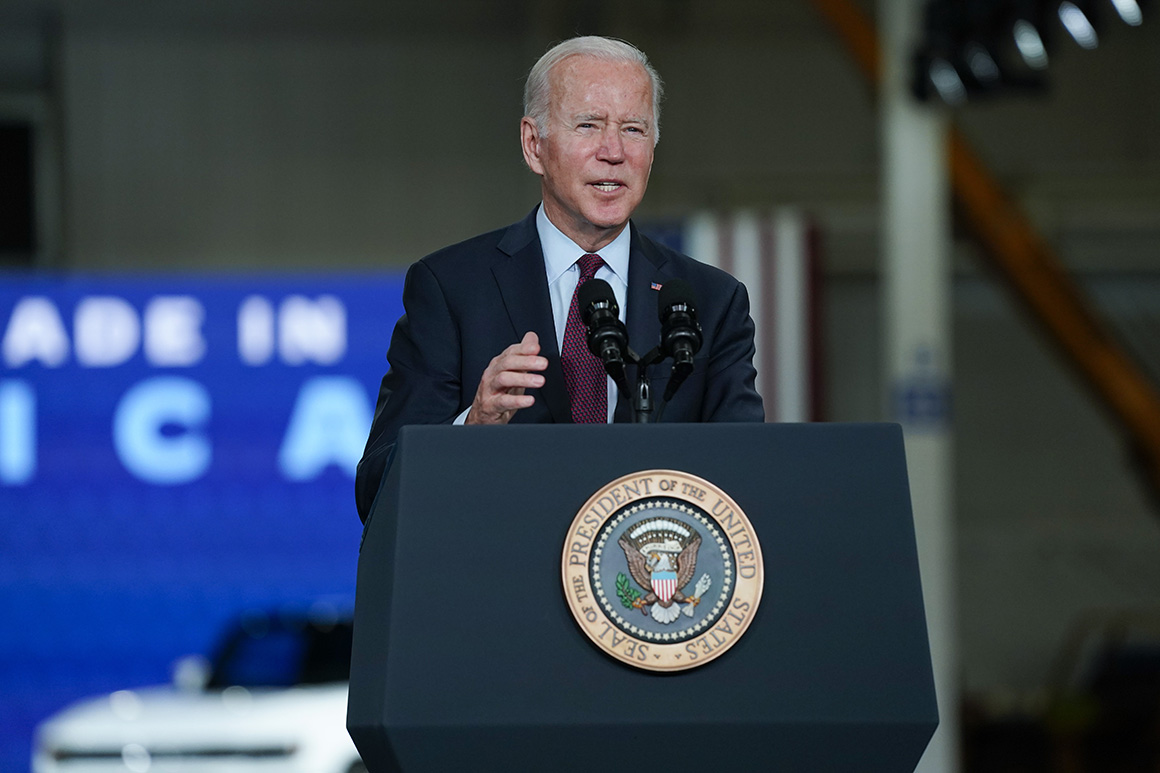 The consumer shift from services to goods over the past 18 months is at the center of a 31-year high in inflation, stoked by massive supply chain disruptions. Biden’s favorability has been sinking just as midterm elections are gearing up. Among his few solutions is to nudge Americans to get out and live their lives — instead of staying at home and ordering even more household goods that will overwhelm suppliers and keep inflation high.

“The best thing a president can do right now is jawboning and lessening expectations,” said Bill Hoagland, senior vice president of the nonprofit Bipartisan Policy Center and a former Republican leadership aide in Congress. “I feel a little bit sorry for the president. A lot of this is out of his control.”

The Commerce Department’s latest report on retail sales this week — up 1.7 percent in October — showed consumers maintaining their spending streak. But strong demand for merchandise only intensifies the supply-demand imbalance that has made shopping more expensive. Sales at restaurants and bars were flat, showing the lingering impact of the pandemic.

The White House says the price increases are temporary, and the president has moved to open transport bottlenecks. The administration is also putting an anti-inflation spin on its signature policy efforts — the bipartisan infrastructure bill Biden signed into law Monday and Build Back Better, his multitrillion-dollar “human infrastructure” legislation.

The message is that the legislation’s tax cuts, combined with cheaper prescription drugs, health coverage, child care, and elder care will help household budgets and bring people back into the labor force.

“This bill is going to ease inflationary pressures, lowering the cost to working families,” Biden said last week in Baltimore.

Biden economic policy adviser Jared Bernstein said the president has taken steps to ease economic shocks, including pushing for trillions of dollars in stimulus spending to boost demand during the pandemic recession.

“When it comes to offsetting the demand-side shock, the president has acted with alacrity,” Bernstein said in an interview. Fixing the supply chain is more complicated.

“We don’t control the ports in China, Singapore or Amsterdam,” he said, “and they, too, are facing supply chain constraints.”

But Bernstein cited Biden’s move to extend hours at California ports and money directed to ease bottlenecks at harbors in North Caroline and Georgia.

“If you explain to people in concrete terms what you’re doing in this space, they’ll recognize that you’re fighting for them,” he said.

“They’ve been struggling quite a bit with how to characterize this,” said Michael Strain, director of economic policy studies at the American Enterprise Institute, a free-market think tank. “They’ve made some missteps. They need to at least be perceived as understanding that this is an issue.”

Republicans are blaming Democratic-led stimulus spending for overheating the economy. They’ve rolled out the bugaboo of stagflation — slow growth coupled with runaway inflation — that brought down Jimmy Carter’s presidency.

Stagflation is catchy but a canard. Companies are flush with cash, and consumer demand shows no sign of slowing. The economy continues to expand.

Spinning the economy is part of the president’s job, be it for political or real-world ends. In 1974, President Gerald Ford tried to wrestle inflation to the ground with rhetoric.

Carter tried his hand at public persuasion four years later. It was April and Washington’s cherry blossoms were in bloom. But the president put on a sweater and sat by a fire to tell folks to stop wasting energy. Like Ford’s WIN buttons, the speech drew public ridicule.

“It sounds silly now, but Carter was in the same kind of situation that every president is in if there’s something wrong with the economy that they really can’t control,” said Joel Naroff, president of Naroff Economics, a strategic consulting firm. “They have to at least show that they’re trying to do something about it.”

When growth sputtered after George H.W. Bush entered the White House, he reassured people that things would be fine. Bill Clinton took the opposite tack in the 1992 presidential campaign — it’s the economy, stupid — making Bush look out of touch.

But Clinton, too, initially failed to connect on the economy, contributing to the Democratic Party’s historic midterm losses in 1994.

After the 2001 terrorist attacks, George W. Bush appealed to consumers’ patriotism to revive the economy.

And by 2011, as the U.S. was still struggling with the effects of the financial collapse, President Barack Obama tried to talk companies into hiring.

“Many of you have told me that you are waiting for demand to rise before you get off the sidelines,” Obama said in a speech to the Chamber of Commerce. “But many of your own economists and salespeople are now forecasting a healthy increase in demand. So I want to encourage you to get in the game.”

Trump famously tried to publicly shame companies via Twitter into doing his bidding. Executives — and the market — eventually ignored him.

Biden’s challenge is that he can highlight how consumer demand for goods is driving much of the inflation problem. But getting consumers to change their behavior is a lot harder.

“How do you change economic reality? You don’t,” Naroff said. “If you tell people ‘stop buying,’ they’re going to give you the single-finger wave. There’s nothing the guy can do about it. But it is a political problem for him.”