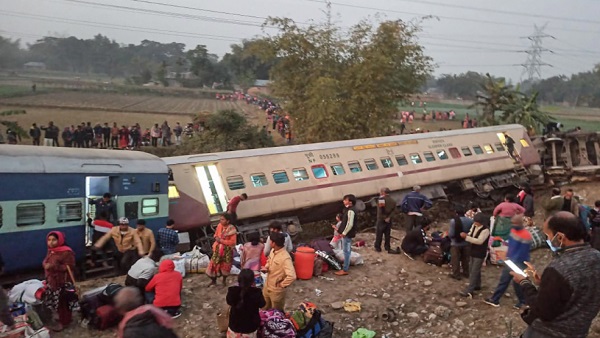 Guneet Kaur, Chief PRO, North East Frontier Railway, said that after the accident, all the coaches of the train have been evacuated and the people who survived the accident have narrowly escaped. It may be recalled that 12 coaches of Bikaner-Guwahati Express derailed at Mayanguri in Jalpaiguri district. After the accident, Railway Minister Ashwini Vaishnav tweeted that he was going to the spot. “I have spoken to Prime Minister Narendra Modi and briefed him on the incident as well as information on relief and rescue operations at the spot,” the Railway Minister said. We will fulfill all our responsibilities.

On the other hand, Prime Minister Narendra Modi tweeted after the accident and wrote that he had spoken to Railway Minister Ashwini Vaishnav and sought information about the incident. My condolences to the families of those killed in the accident. I pray that the injured will recover soon. A high-level inquiry has also been ordered into the incident. Finally, an inquiry has been ordered into the cause of the derailment. The Railway Minister has also announced post-accident compensation. Compensation of Rs 5 lakh has been announced for the heirs of the deceased and Rs 1-1 lakh for the critically injured, while Rs 25,000 has been announced for the minor injured.

The accident happened at 5 pm on Thursday. In the pictures that came out from the spot, it can be seen that the coaches of the train have collided with each other, the collision was so severe that some of the coaches overturned. After the accident, about a dozen people of the village were involved in relief and rescue operations, after which the National Disaster Management Team reached the spot and started the relief work.