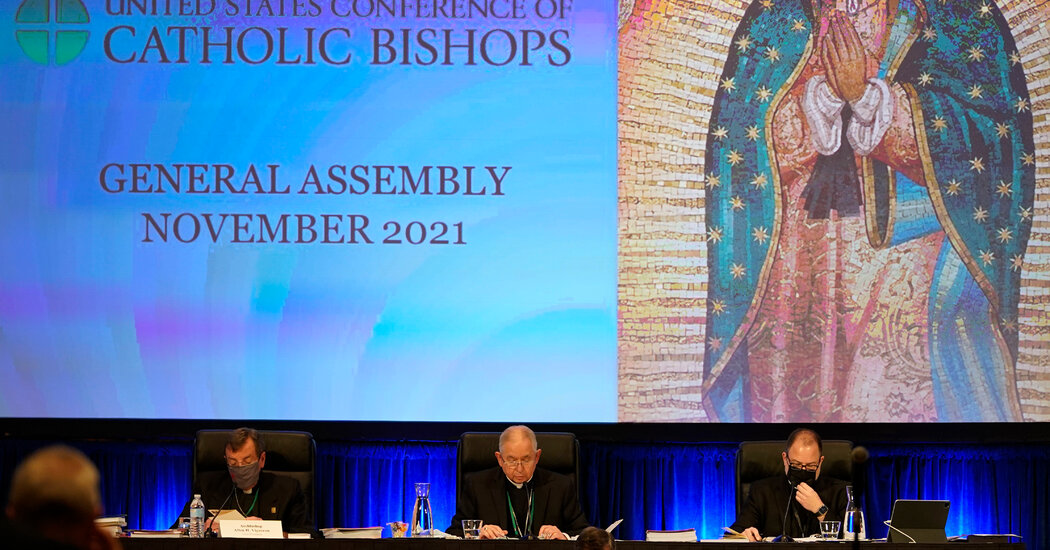 BALTIMORE — The Roman Catholic bishops of the United States backed away from a direct conflict with President Biden on Wednesday, approving a new document on the sacrament of the eucharist that does not mention the president or any politicians by name.

At issue was the question of which Catholics, under which circumstances, are properly able to receive communion, one of the most sacred rites within Christianity. For some conservative Catholics, the real question was more pointed: Should Catholic politicians who publicly support and advance abortion rights be denied the sacrament?

For some of the most outspoken critics of Mr. Biden and other liberal Catholic leaders, the document represented a strategic retreat. Still, its very existence highlighted a divide between conservative American bishops and the Vatican, and pitted some of the nation’s most powerful prelates against the country’s second Catholic president.

It also illuminated sprawling rifts among ordinary American Catholics, falling along lines that have become familiar since the presidency of Donald J. Trump scrambled both political and religious loyalties. An emboldened Catholic right wing, including media outlets and activist groups, now feels increasingly free to antagonize Pope Francis and his agenda.

The document, approved overwhelmingly, was the result of a contentious meeting in June, when the United States Conference of Catholic Bishops voted to draft the guidance after hours of debate. That vote was a victory for conservative bishops who have depicted Mr. Biden in particular as a grave threat to the church. On Inauguration Day in January, Archbishop José H. Gomez of Los Angeles, the conference’s president, issued a statement characterizing the new president as promoting policies that “advance moral evils and threaten human life and dignity, most seriously in the areas of abortion, contraception, marriage and gender.”

This time, bishops took their debates over the issue behind closed doors in an executive session the evening before the vote.

Though the new guidance does not single out individuals, it does emphasize the obligation of Catholic public figures to demonstrate moral consistency between their personal faith and their public actions. “Lay people who exercise some form of public authority” have a duty to “serve the human family by upholding human life and dignity,” the document states. And it says that bishops have a “special responsibility” to address situations in which there is a gap between public actions and church teaching.

Pope Francis has not officially weighed in, but he maintains a warm relationship with Mr. Biden, who attends Mass regularly. In October, the pope welcomed the president to the Vatican for a private meeting. Mr. Biden told reporters afterward that the pope had called him a “good Catholic” and that he should continue receiving communion. Mr. Biden received communion at St. Patrick’s Church in Rome the next day.

Asked about the communion issue by reporters in September, the pope remarked that “I have never refused the eucharist to anyone,” though he noted that he had not knowingly been presented with the dilemma.

The practical decision about whether to deny communion generally falls to local priests. It is rare that a politician is actually turned away while inside a church, although Mr. Biden was denied the sacrament when he visited a South Carolina parish while running for president.

Archbishop Christophe Pierre, the Vatican’s representative to the United States, mentioned the discord in an address to the group on Tuesday. “There is the temptation to treat the eucharist as something to be offered to the privileged few,” he said, echoing the pope’s maxim that the sacrament is not a “prize for the perfect.”

The document approved on Wednesday does not address the question of public figures’ right to the eucharist head-on as some had hoped — and others feared. And the 29-page guidance barely mentions the word “abortion.”

Instead, it offers a detailed examination of the theological and spiritual significance of the eucharist, in which Catholics believe that bread and wine literally become the body and blood of Christ. The text quotes the 20th-century activist Dorothy Day, St. Augustine and the pope’s Twitter feed.

Catholic leaders have expressed concerns for years that lay Catholics do not understand the church’s core teachings on the eucharist. Those anxieties sharpened when a Pew poll in 2019 found that more than two-thirds of American Catholics believe that the bread and wine of communion are mere symbols.

But the ecclesiastical debate has also served as a proxy for battles over politics, power and the future of the Catholic Church.

The meeting in Baltimore was the first in-person general assembly of the United States Conference of Catholic Bishops since 2019. Last year’s meeting was canceled as a precaution during the coronavirus pandemic. In June, the bishops convened virtually.

The weeks before the meeting were roiled by conflict. In early November, Archbishop Gomez delivered a speech in which he dismissed social justice movements and “wokeness” as dangerous false religions. The speech, delivered virtually to the Congress of Catholics and Public Life, drew a sharp backlash from some scholars and progressive Catholics.

In an opening address at the meeting on Tuesday, Archbishop Gomez struck a less inflammatory tone, asking how the church could engage an increasingly secular country. He lamented a breakdown of a shared national story “rooted in a biblical worldview and the values of our Judeo-Christian heritage.” The speech received a standing ovation from the bishops in Baltimore.

The new document emphasizes the distinction between categories of sins and reminds Catholics that they should not receive communion in a state of mortal sin — a grave offense committed willingly — without first going to confession and receiving absolution.

The document quotes from a 2007 text known as the Aparecida Document, named for a gathering of bishops in Central and South America and issued by a committee headed by Pope Francis himself, who was then Cardinal Jorge Bergoglio. That document, which has come to be read as a foundational text of his approach, contains sharp words for “legislators, heads of government and health professionals” who violate church teaching on abortion and other “grave crimes against life and family.” Catholics in such positions of influence may not receive communion, it says.

In May, the Vatican warned the U.S. bishops in a letter that they should engage in “extensive and serene dialogue” before drafting the document, cautioning that the vote could “become a source of discord rather than unity.”

Conservatives described the result as a document that points to the importance of maintaining standards around the eucharist. Bishop Joseph Strickland of Tyler, Texas, who has been sharply critical of Mr. Biden, said in an interview that although the document did not name names, it “does acknowledge that not everyone should just walk up and receive.”

Archbishop Salvatore J. Cordileone of San Francisco described the new document as flexible. “Each bishop, when he’s faced with this situation, has to make a determination with respect to what the realities are on the ground where he’s at,” he said. Archbishop Cordileone has been sharply critical of Catholic politicians who support abortion rights, including Nancy Pelosi, the speaker of the House, whose district is in San Francisco.

The conference attracted onlookers and protesters with a wide variety of theological and political objections to the proceedings, and the direction of the church more broadly.

On Monday, a coalition of groups supporting such causes as the ordination of women and L.G.B.T.Q. rights participated in a prayer walk outside the hotel hosting the conference that called on the bishops to “be pastors, not political operatives.”

On Tuesday, at a waterfront pavilion within view of the hotel, hundreds of conservative Catholics attended a combative prayer rally hosted by the right-wing Catholic media outlet Church Militant. The rally, titled “Enough Is Enough,” was intended to express a range of objections to the church hierarchy. Signs in the crowd included “No Communion for Killers” and “Let’s Go Brandon,” a coded phrase that is a political swipe at Mr. Biden.

Dan Ritosa, who traveled to the rally from the Cleveland area, said he hoped the bishops would maintain the high status of the eucharist. “Prayer is like talking to God on the phone and reading scripture is like reading a letter that God wrote,” he said. “But consuming the eucharist is like being intimate with your spouse.”

One expected speaker at the Church Militant event, Stephen K. Bannon, did not appear after being indicted by a grand jury on two counts of contempt of Congress after he refused to provide information to a House investigation of the Jan. 6 Capitol riot.

Mr. Bannon, an architect of Mr. Trump’s rise as a populist hero, has positioned himself in recent years as a “gladiator” of right-wing Catholicism. The Church Militant event was emceed by Milo Yiannopoulos, a media persona who has been largely drummed out of mainstream conservative venues over his comments minimizing the seriousness of pedophilia, among other issues.

Gladys Garavito had traveled from Jacksonville, Fla., to attend the event with her sister. A lifelong Catholic, she described feeling disillusioned in recent years by the hierarchy’s failure to stand up to politicians like Mr. Biden. “It’s like there’s two Catholic worlds,” Ms. Garavito said, describing a growing divide between “country club Catholics” like the president and Ms. Pelosi, and “traditional” believers like herself.