Chevez Goodwin, No. 5 USC rally in 2nd half to beat Oregon State 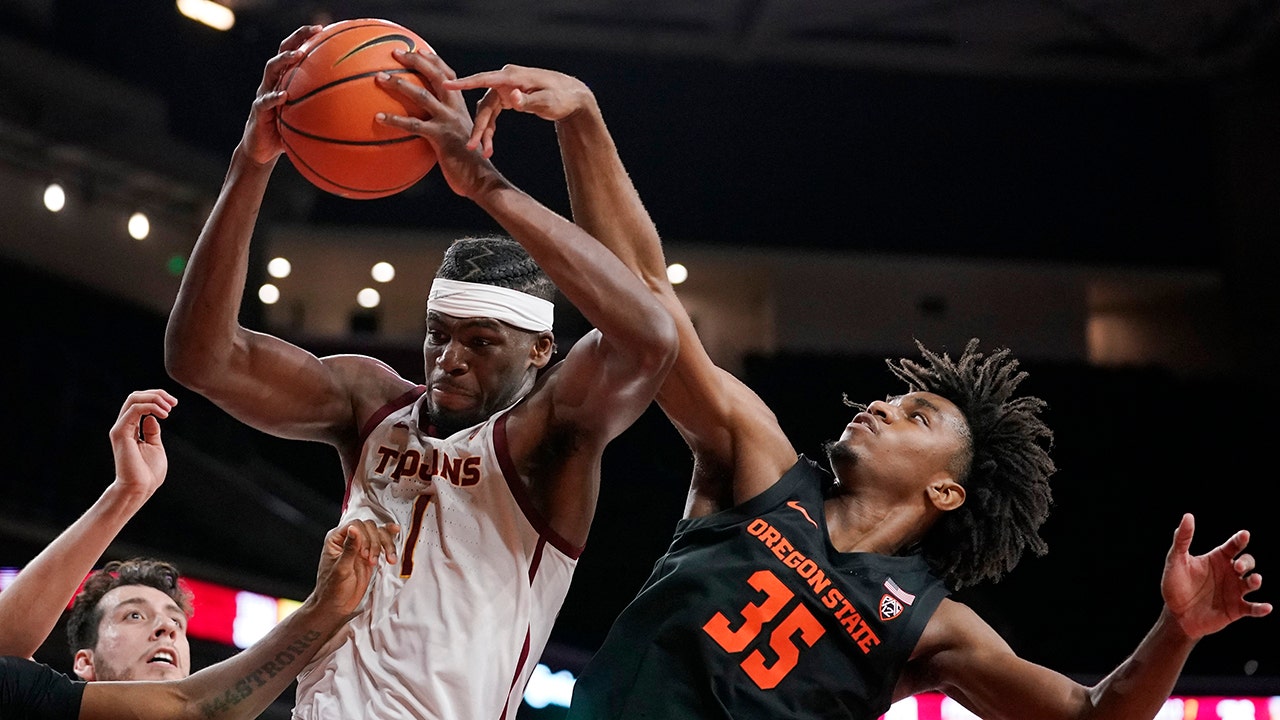 Andy Enfield admits his fifth-ranked Southern California squad is still rusty after a 16-day layoff due to a COVID-19 outbreak. But the Trojans need to make up quickly for lost time, especially during this stretch of three games in five days.

USC struggled early against Oregon State on Thursday night but was able to rally in the second half for an 81-71 victory.

“We haven’t had a lot of practice time and I think that has hurt us, but there’s no excuses. We have to figure this out quickly and our players have to get back to the flow we had,” Enfield said.

USC (14-1, 4-1 Pac-12) was handed its first loss of the season Tuesday at Stanford and trailed by 10 during the second half against the Beavers before coming back. USC didn’t grab its first lead until midway through the second half and didn’t get firm control of the game until the final three minutes.

On a night when Isaiah Mobley was held in check most of the way, Chevez Goodwin picked up the slack with 20 points and 12 rebounds. Drew Peterson added 15 points and Boogie Ellis scored 14 for the Trojans, who were playing their first home game since Dec. 15.

“We came together. They had the momentum but we found a way to pull it out at the end,” said Goodwin, who posted his second double-double of the season. “It was a team effort. My thing was to bring energy as much as I can.”

Mobley, who came into the game leading the Pac-12 in rebounds and fourth in scoring, finished with 11 points and seven boards.

“I’m not going to lie, I am running on fumes — but we have to grind it out. This is what we signed up for. It wasn’t easy, but we got the win,” he said.

Warith Alatishe’s layup gave the Beavers a 71-70 advantage with 3:55 remaining before the Trojans scored the final 11 points. Mobley had five straight, including a pair of free throws after Alatishe’s fifth foul with 3:41 left, to put the Trojans up for good.

The Beavers made 19 of their first 32 shots and had a 51-41 lead less than four minutes into the second half before they went cold and the Trojans rallied.

USC went on a 21-6 run over the next seven minutes, including nine points by Goodwin, to go up 65-59 on Reese Dixon-Waters’ 3-pointer with 9:10 remaining. The Beavers went 2 of 14 from the field during that stretch.

“They did exactly at halftime what we said they were going to do in the second half. USC got physical, threw us around, drove right at us and unfortunately we weren’t able to stand toe-to-toe with them the last few minutes as we did over the course of the game,” Oregon State coach Wayne Tinkle said.

Lucas hit a 3-pointer to give the Beavers a 35-26 lead before the Trojans went on an 11-2 run to tie it. USC appeared to have momentum after Ellis’ jumper from beyond the arc tied it at 37 with 1:23 remaining, but Lucas responded with a 3 to put Oregon State back on top.

Ellis tried to get the Trojans within one, but his driving layup was blocked by Alatishe. Roman Silva was able to get the ball before it went out of bounds to give Oregon State possession before Alatishe made a layup to extend the lead to 42-37 at halftime.

Peterson reached 1,000 collegiate points on a jumper early in the second half. The 6-foot-9 senior scored 516 points during two seasons at Rice before transferring to the Trojans before the 2020-21 season.

Officials were not letting any taunting or extra shoving in the paint go uncalled. Oregon State’s Dashawn Davis and Alatishe as well as USC’s Isaiah White were assessed technical fouls.

“What I have noticed is when there are no fans, there are more technical fouls called. The refs can hear what is being said,” Mobley said. “They did a good job of initially trying to stop it, but there was a lot of chirping going on.”

Oregon State: The Beavers are playing top-five teams in back-to-back games for the first time since 1971. Coincidentally, those teams were also USC and UCLA.

USC: The Trojans were back at the Galen Center but it didn’t feel like much of a home-court advantage. Only families and guests of players and coaches are permitted to attend events until Jan. 21 due to COVID-19. USC is conducting classes remotely during the first two weeks of the spring semester.

Oregon State: Remains in Los Angeles to face No. 3 UCLA on Saturday.