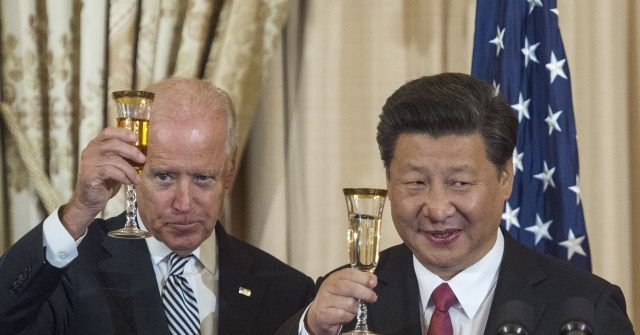 China’s dominance of global trade in the wake of the Wuhan coronavirus pandemic was confirmed on Friday with the release of annual data that showed its trade surplus hitting a record high of $676 billion in 2021, a 26 percent gain over 2020 driven by a 30 percent surge in exports.

The Financial Times (FT) noted Friday that China posted double-digit growth in exports during every single month of 2021. Economist Larry Hu of Australia’s Macquarie Group said the surge in exports was enough to “offset the slowdown in property and the very weak consumption” posted by China.

“After a deep fall in early 2020, Chinese exports began to rise sharply soon after domestic cases of the virus slowed to a trickle and as lockdowns were imposed in other countries around the world. Exports continued to climb through 2021 despite widespread delays and blockages across global supply chains,” the FT noted.

The property slowdown is most dramatically reflected by the travails of Evergrande, the titanic Chinese property developer that spent much of 2021 teetering on the brink of fiscal collapse. On Friday, Evergrande worked out a deal with investors to delay payments on a $708 million bond, staving off what would have been China’s first public bond market default.

“The move highlights how big Chinese borrowers such as Evergrande can effectively operate in two distinct financial worlds, with creditors onshore sometimes taking a different approach from their international peers, and with markets in China somewhat shielded from defaults offshore,” the Wall Street Journal observed.

Evergrande and other Chinese property firms are not out of the woods yet. The South China Morning Post (SCMP) predicted a “bleak” year ahead, with more debt crises, a continued slump in home sales, and property tax increases looming.

The SCMP cited estimates that investors lost over $90 billion in combined market value from Chinese property stocks last year, while $126 billion in value was erased from the real estate index. Chinese developers have almost $20 billion in offshore bonds coming due in the first and second quarters of this year, almost double the amount that came due in the last quarter of 2021.

The FT postulated 2021 would prove to be a peak year for Chinese exports, as a trend of decelerating growth that began in September continues and the rest of the world emerges from the pandemic China unleashed and profited from so handsomely.