Ciara Puts Her ‘Cake’ Out on Display In This Brown Attire 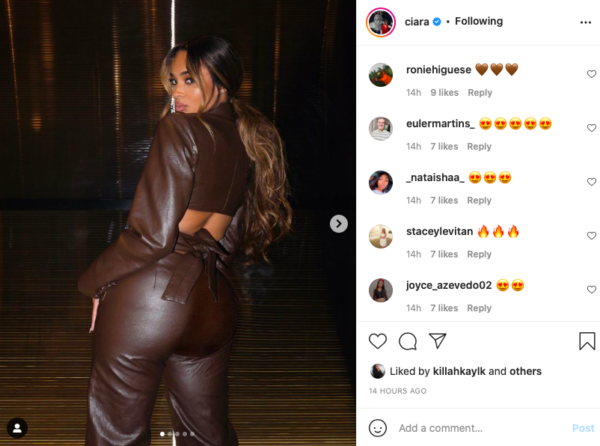 Ciara’s assets were the topic of conversation on Tuesday, Nov. 16, after she shared an upload showcasing a brown leather ensemble she was donning.

The singer, who was seen wearing three brown outfits during the 10th-annual Baby2Baby gala in California, presented her close friend Vanessa Bryant with the Giving Tree Award. The nonprofit organization annually honors a mother that utilizes her public position to help bring attention to children in need.

While attending the event, the 36-year-old gave fans a view of her derrière as she seductively posed for the camera. In addition to the sexy photo, Ciara also posted a frontal image of the two-piece diagonally cut attire. As fans viewed her post, many marveled over her “booty.” An individual even went as far as to ask if the singer was always curvy.

“She’s gaining that booty back.”

“Georgia peach is so round.”

“Has all that been back there?”

“I Want Some Of That Chocolate Cake.”

Among the derrière remarks, others expressed how beautiful Ciara looked.

One wrote, “This is one BAAAADDDDDDDDDD sistah! Cici is beautiful. PERIOD.” Another said, “This outfit…WOW, the richness of brown leather, absolutely gorgeous.” An Instagram user claimed this outfit solidified the mother-of-three’s spot as the “definition of beautiful.” That person stated, “You know what, Ciara… You are The Definition of Beautiful at this Point!!!”

Ciara’s love for fashion in the past few weeks has helped the singer accomplish several looks. The list included a taupe-colored turtleneck dress that displayed her toned legs. In the post shared earlier this month, Ciara revealed she was honoring her friend and fashion designer LaQaun Smith with the Ace Hero Designer of the Year Award.

She wrote, “It was a great honor to present the Ace Hero Designer of the Year Award to you @Laquan_Smith! [You] deserve it all! Thank you for having me. Love you!”

More Stories from Our Partners:

‘We Wouldn’t Have Survived Without That’: Serena Williams Praises Mother Oracene Price for Being the Driving Force as the Family’s Provider

‘I Paved My Own Damn Way’: Black Professor Becomes the First to Earn Tenure at Oldest College In Louisiana