Column: He just turned 108. Here’s his secret to a long life 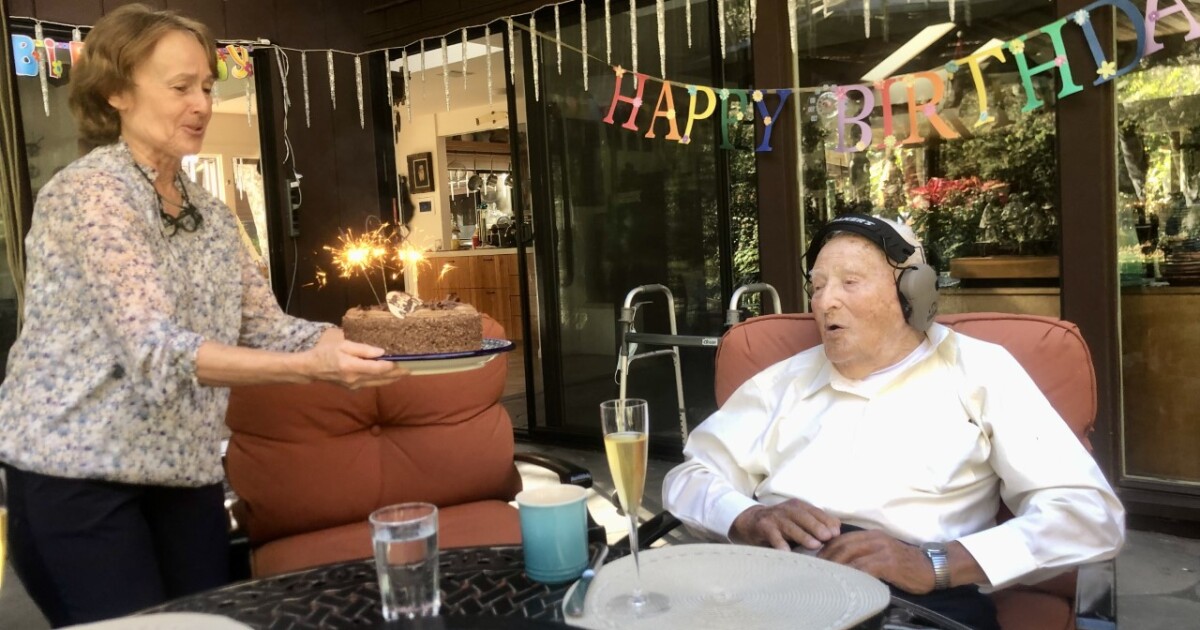 Spread the love
At his birthday party on Wednesday, Morrie Markoff was telling me about his family’s rough ride through the pandemic. His older brother died, and for a while it looked as though Morrie might follow him.

“My mother thought she was going to lose me because I had a 104-degree temperature,” Morrie said. “And I fought it off. Amazing.”

“He’s now the 24th oldest person in the United States,” said Morrie’s son, Steve, who hosted the birthday party in his back yard in Pacific Palisades.

Morrie Markoff comes in three years behind the leader of the pack, according to an internet gerontology site.

At his party, Morrie was thinking, talking and even singing to his wife Betty, who died at 103. Most marriages have their ups and downs, and so did Morrie’s and Betty’s. But in her absence, he seems to have fallen for her all over again.

“You were my girl,” he sang to the woman he refers to as Betsy. “I wake up in the morning to greet the newborn day. I can’t wait to see you and say, ‘Betsy doll, I love you. I love you.’”

I asked Morrie if he thinks he might be with her again, somewhere, and he said he doesn’t know what’s out there beyond this life.

“Nobody has been there and back,” he said.

I corrected him, reminding Morrie that he and I met because we had both briefly kicked the bucket. In 2012, I wrote that I had been resuscitated after flatlining with sudden cardiac arrest. Morrie emailed me to say we should “hang around,” because the same thing had happened to him the day before he turned 99.

He invited me to the LADWP cafeteria, across the street from his Bunker Hill apartment, and we had a cup of coffee. Since then I’ve been to Morrie’s 100th birthday, Betty’s 100th, and their 75th wedding anniversary.

“Being old hasn’t been bad,” Betty told me when I first met her. “The hardest part is when you see your kids becoming senior citizens. That’s really hard.”

Not long after I made their acquaintance, the Markoffs were exploring downtown Los Angeles by bus when they met a fellow passenger who happened to be the owner of an art gallery. Morrie mentioned that he used to own an appliance repair shop in Hollywood, and in his spare time, he made sculpture out of scraps of metal.

The gallery owner took a look at his work, was flabbergasted by the quality, and hosted Morrie’s first-ever art exhibit at her Chinatown gallery.

For his next project, Morrie worked day and night on a memoir. He called it “Keep Breathing,” which was his long-running answer to anyone who asked him the secret of a long life. Morrie, a New York native, sold his new book at a booth at the Los Angeles Times Festival of Books.

One day my late colleague Gary Friedman and I were visiting the Markoffs when Friedman learned that Morrie had been an amateur photographer for decades. Morrie brought out his photo albums and Friedman, an ace photographer himself, said Morrie’s black and white images belonged in a museum.

“His joy of life, and his curiosity, that’s really kept him alive. Plus good genes,” said Steve. “Everything to him is exciting. How did this happen? How did that happen?”

Morrie told me he thinks he was born curious.

“Nobody can see around the corner,” he said. “But I’m going to look. So I started traveling the world when I was about 14.”

When Morrie finished his first book, he started another. He told me last year that he thought he was duplicating himself, so there might not be a Part Two. But that didn’t stop him from writing, often for hours a day. He told me he crawled out of bed in the middle of the night once, because an idea popped into his head. His caretaker, Danny Ching, wondered what the heck he was doing.

Morrie writes in longhand on lined paper. Old school. Steve and his wife Jadwiga said that every week, he completes another 30 or 40 pages of random thoughts, sometimes more. A lot of the material is loaded onto Morrie’s blog.

“I am a prudent man,” Morrie wrote last August. “I will take all advised precautions not to be infected by the current deadly coronavirus everyday taking its toll. … For sure, the current virus is more deadly than the 1918 influenza pandemic.”

Here’s an entry from November:

“I am relaxed, worn out and thinking about the long life I have lived and what I have accomplished. Starting out as a poor kid in a vermin-infested New York tenement to my life now. As a realist I know I won’t be around much longer. I ask myself if there is anything I haven’t done that I want to do. Nada.”

Morrie celebrated his 108th with his family — Steve, Jadwiga, Thomas, Emily, Nancy, Haile and Danny. Daughter Judith, who celebrated from afar in Seattle, told me it seems as though her father is getting younger rather than older.

Morrie’s present was a T-shirt bearing the name of his book — “Keep Breathing.” Jadwiga brought out a cake lit up with sparklers and Morrie smiled.

Did he care to make a birthday wish?