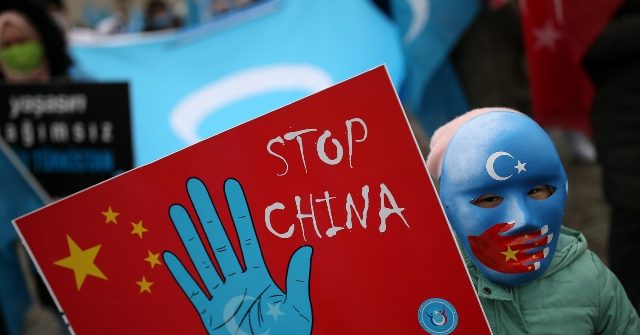 American lawmakers sent a letter to the International Olympic Committee (IOC) on Wednesday demanding an explanation for the IOC’s business deals with two Chinese apparel companies that source their cotton out of Xinjiang, a far-west occupied region where evidence suggests widespread use of slave labor.

Xinjiang is home to the Muslim-majority Uyghur ethnic group, who refer to the region as East Turkistan. China is currently engaging in genocide against the Uyghur people – systematically locking up millions in concentration camps, forcibly sterilizing entire communities to ensure the group does not grow, and bulldozing historical sites, mosques, and cemeteries to divorce Uyghurs from their religion, culture, and identity. Both the administrations of Presidents Donald Trump and Joe Biden recognize the Chinese Communist Party policy of eliminating Uyghur identity as genocide.

In addition to the crime of genocide, extensive evidence points to China enslaving Uyghurs rounded up for concentration camps. In 2020, the Coalition to End Forced Labour in the Uyghur Region, a group of over 200 human rights groups, launched a campaign against the use of cotton from Xinjiang on the grounds that extensive research there showed that many companies engaging in cotton production were using Uyghur slaves to get the work done. The groups accused big-name Western fashion brands of benefitting from the slave trade, as about 84 percent of Chinese cotton – 20 percent of cotton produced worldwide  – comes from Xinjiang.

“Almost every major apparel brand and retailer selling cotton products is potentially implicated,” the Coalition declared at the time. “Right now, there is near certainty that any brand sourcing apparel, textiles, yarn or cotton from the Uyghur Region is profiting from human rights violations, including forced labour, both in the Uyghur Region and more broadly throughout China.”

Two companies contracted to provide uniforms to the 2022 Beijing Winter Olympics have overt ties to the Xinjiang cotton industry: the Chinese sportswear giant Anta Sports and the textile company Hengyuanxiang Group (HYX Group). The heads of the U.S. Congressional-Executive Commission on China (CECC) wrote to IOC President Thomas Bach on Wednesday demanding answers to the details of the IOC’s relationship with the companies in question.

“Because Anta and HYX Group both continue to use cotton produced in the XUAR [Xinjiang Uyghur Autonomous Region], there is a worrisome possibility that IOC personnel or others attending the 2022 Olympic Games will be wearing clothing contaminated by forced labor,” the letter read in part. The text, signed by Sen. Jeff Merkley (D-OR) and Rep. James McGovern (D-MA), requested proof that the Olympics clothing in question was not manufactured with slave products.

“What assurances, if any, did the IOC receive that the certificate provided by HYX Group was reliable?” the letter asked, requesting that the IOC make public proof that HYX allegedly gave Olympics organizers that slaves did not manufacture their apparel.

The letter also requested the IOC “explain publicly the assurances Anta Sports gave the IOC that the products Anta Sports supplied to the IOC were not produced in whole or in part by forced labor.”

“Cotton produced in the XUAR is synonymous with forced labor and the systematic repression that takes place there,” the letter read. “Forced labor plays an integral role in the genocide taking place against Uyghurs and other predominantly Muslim ethnic groups in the region.”

The IOC signed a deal with Anta, one of China’s largest sports brands and a Fila affiliate, in 2017, shortly before the first reports of dictator Xi Jinping implementing genocidal policies in Xinjiang began. Anta became the official sportswear partner of the 2022 Beijing Winter Olympics.

The IOC signed its deal with HYX in 2019, commissioning the group to manufacture Olympics uniforms.

“We are pleased to be working with HYX and look forward to wearing our formal uniforms with pride in Tokyo next year and in Beijing in 2022,” Bach said at the time. “I would like to thank in particular IOC Vice-President Zaiqing Yu for his work in bringing this agreement to life.”

The CECC noted that HYX maintains facilities to process cotton in China. Anta, in turn, has vocally defended the use of Xinjiang slave cotton, backing out of the Better Cotton Initiative last year in protest of the organization’s opposition to Uyghur slavery.

“We have been purchasing and using cotton produced from China, including the Xinjiang region, and we will continue to purchase and use cotton from China,” Anta said in a statement last year.

The Chinese Foreign Ministry defended the two companies on Thursday in response to the CECC letter.

“I want to point out that this so-called the US Congressional-Executive Commission on China (CECC) has been biased against China,” Foreign Ministry spokesman Wang Wenbin said. “It keeps making all sorts of unfounded remarks related to China and has no political credibility at all.”

“The so-called ‘forced labor’ in Xinjiang, a lie of the century, is long bankrupt. Except for a handful of anti-China forces harboring ulterior motives, all people respecting facts and upholding conscience will not accept such despicable hypes,” Wang concluded.