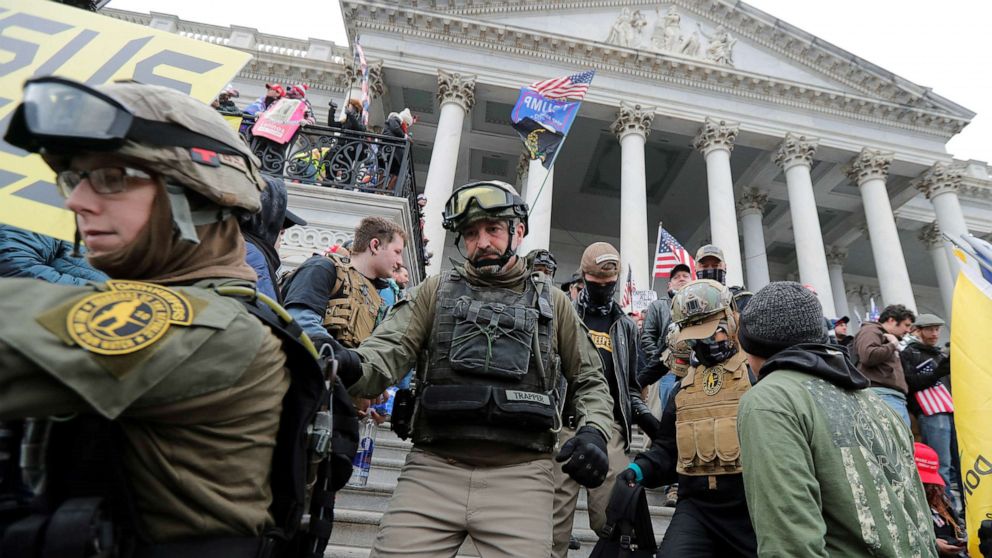 The Justice Department has unsealed a major indictment charging the leader of the Oath Keepers militia group along with multiple other members with seditious conspiracy related to their alleged coordination in advance of the Jan. 6 attack on the U.S. Capitol.

This marks the Justice Department’s first Jan. 6 indictment using the seditious conspiracy charge, which accuses Oath Keepers leader Stewart Rhodes and other members of the group of conspiring to “to oppose by force the execution of the laws governing the transfer of presidential power” from former President Donald Trump to President Joe Biden.

A conviction on the charge of seditious conspiracy carries a maximum sentence of no more than 20 years.

Rhodes, who is not believed to have entered the Capitol but was seen with several of the defendants gathered outside on Capitol grounds both before and after they entered the building, has denied any involvement in urging the group to storm the building and has said he believes it was wrong for the members of the group to do so.

In previous court documents in the conspiracy case against the Oath Keepers, Rhodes was repeatedly referred to as “Person 1” as prosecutors outlined his communications to members in advance of Jan. 6.

Several members of the group are alleged to have stashed heavy weapons at a hotel in Virginia and positioned a so-called “Quick Reaction Force” that would come to Washington in the event of significant violence or if former President Donald Trump invoked the Insurrection Act.

The new charges come a week after Attorney General Merrick Garland delivered remarks to the Justice Department’s workforce on the federal investigation into Jan. 6, in which he pledged that all those “criminally responsible” would be held to account, “at any level.”

“We build investigations by laying a foundation,” Garland said in the remarks. “We resolve more straightforward cases first because they provide the evidentiary foundation for more complex cases. Investigating the more overt crimes generates linkages to less overt ones. Overt actors and the evidence they provide can lead us to others who may also have been involved. And that evidence can serve as the foundation for further investigative leads and techniques.”