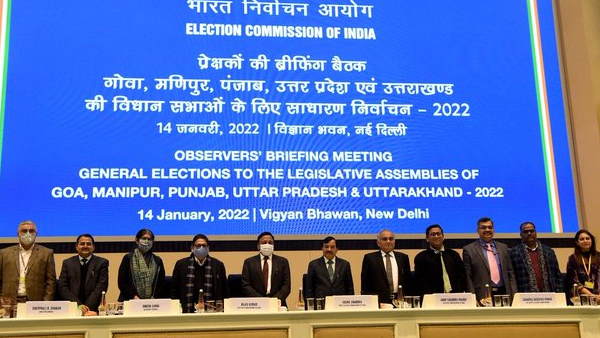 New Delhi, January 14: The Election Commission on Friday held a meeting with observers posted in the five states where Assembly elections are being held. During the meeting the Chief Election Commissioner (CEC) apprised the senior officers of the Commission, the police and the Expenditure Monitor about their responsibilities during the election duty. At the same time, instructions have been given to ensure free and fair elections in all the five states.

After the meeting, the Election Commission informed that the Commission today conducted a briefing with the observers to be deployed in the forthcoming Assembly elections in Goa, Manipur, Punjab, Uttarakhand and Uttar Pradesh. The meeting was attended by more than 1,400 officials.

The ECP said officers from the IAS, IPS, IRS and other services were posted as generals, police and expenditure monitors. CEC Sushil Chandra directed all observers to coordinate with the agencies to ensure fair, transparent and secure elections.

Voting will take place from February 10 to March 7

Assembly election dates have been announced in Uttar Pradesh, Uttarakhand, Punjab, Manipur and Goa. Voting took place in these states from February 10 to March 7. Elections will be held in the same phase in Goa, Punjab and Uttarakhand. Voting will be held in two phases in Manipur. In Uttar Pradesh, voting for the Assembly elections will be completed in seven phases. On March 10, all five states will have a simultaneous vote count and the results will be announced. Let me tell you that there are BJP governments in Uttar Pradesh, Uttarakhand, Manipur and Goa. There is a Congress government in Punjab.

The choice is between coronavirus infection. In such a scenario, the commission has taken several precautionary measures for voting. The Election Commission has also banned election road shows, processions, rallies and pedestrians till January 15.