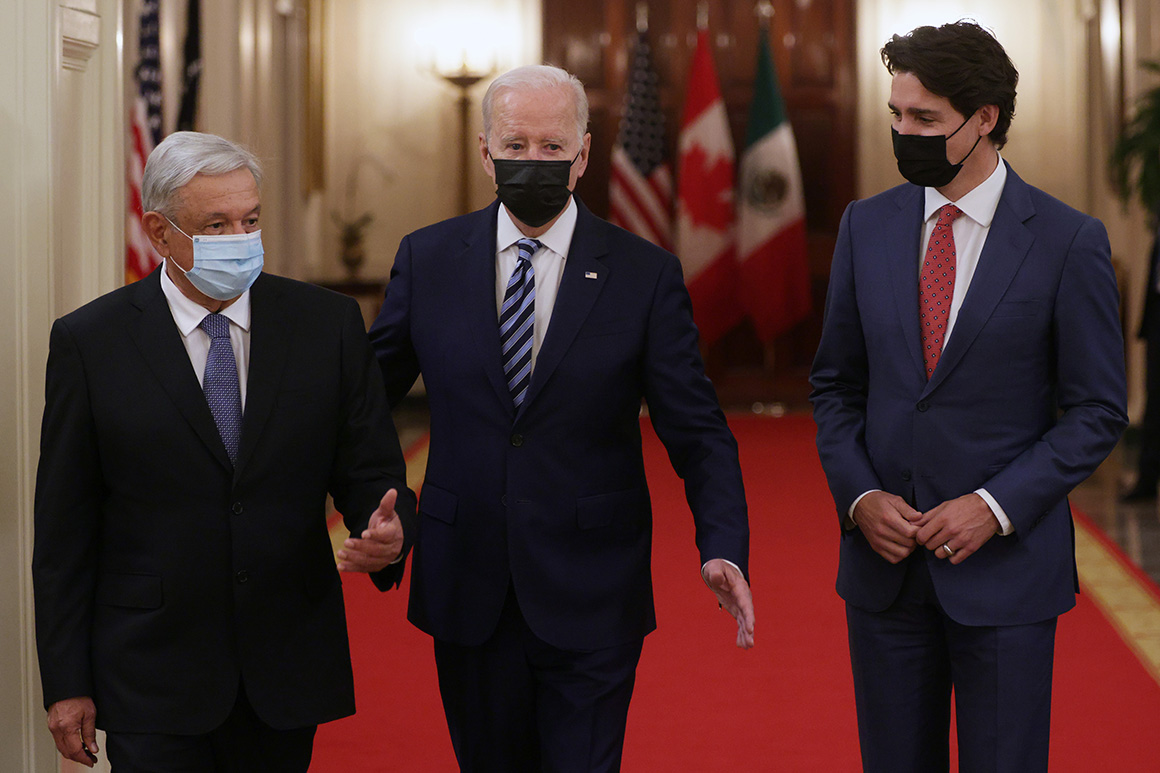 For Trudeau, warning U.S. officials about the fallout of Biden’s electric vehicle proposal was a top objective during his two-day visit to Washington.

“We underlined to what point this would be a big problem for auto production in Canada,” Trudeau said at a news conference late Thursday after the North American Leaders’ Summit. “We very clearly underlined our position.”

The tensions overshadowed the first trilateral gathering of the continent’s leaders since 2016, a party Biden convened Thursday with the goal of restoring North American relations after a strain under former President Donald Trump.

Biden appeared unmoved when pressed on the tax credit issue by reporters ahead of his meeting with Trudeau. But the president offered some hope for the United States’ neighbors by hinting the controversial provision may struggle to survive.

“We don’t know what will happen in the Senate, but there’s a lot of complicating factors,” Biden said in the Oval Office as he took a few questions about the proposal. “We’re going to talk at length about it, I’m sure.”

The House on Thursday night was expected to pass the pro-union electric vehicle tax credit as part of the $1.7 trillion social spending bill. But the provision is likely to run into serious opposition in the Senate, where Manchin, the coal-state moderate who is the key vote in Democrats’ razor-thin majority, has expressed strong opposition.

“This is wrong. This can’t happen. It’s not who we are as a country,” Manchin told Automotive News last week after visiting an auto plant owned by Toyota, a key opponent of the provision, in his state.

More broadly, the three leaders met for just under three hours at the White House, in addition to separate bilateral meetings, to discuss a range of other issues, including migration, climate change and security cooperation.

Notably, the leaders did not participate in a joint press conference that was previously characteristic of the North American Leaders’ Summit and has become customary during foreign leaders’ visits to the White House.

Trudeau was the most willing to engage with the press and other Washington circles, hosting a news conference after the summit at the Canadian Embassy and taking audience questions during an event at the Wilson Center think tank.

Mexican President Andrés Manuel López Obrador left it up to Foreign Minister Marcelo Ebrard and other Mexican officials to discuss the summit at an embassy news conference.

Ebrard did not mention any discussions among the three leaders on the tax credit — nor did he mention any points of contention from the summit. Instead, he repeatedly emphasized that the meeting was positive, calling the summit “extraordinary” and noting a “good chemistry” between the leaders that “represents a new chapter in the relationship.” He also confirmed that the leaders agreed to meet again next year in Mexico City.

The top Mexican official also signaled that several of the thorny issues between the U.S. and Mexico were not fully broached, including López Obrador’s moves to curb private investment in Mexico’s energy sector. He also said the situation in Cuba and Nicaragua was not mentioned, even though a senior administration official earlier this week said Biden would “certainly” raise the topic of Cuba as the U.S. seeks to build more international support against the Cuban regime’s repressive tactics.

Even before the House took up the spending package Thursday, Biden’s electric vehicle tax credit plan was feeding fears north of the border that it would punish Canada’s deeply integrated auto sector.

The provision would provide consumer tax credits of $4,500 for electric vehicles made with union labor in the U.S., on top of other credits for the clean cars. That would disadvantage a number of foreign automakers, like Toyota, Volkswagen and Honda, which operate in nonunion states and have loudly opposed the measure. But it would allow Biden to deliver a tangible victory for organized labor, one of his major constituencies, as well as workers in Midwestern states like Michigan that will be crucial for his reelection.

Chrystia Freeland, Trudeau’s deputy prime minister, told reporters Wednesday that the proposal had the potential to become the “dominant issue” in the Canada-U.S. relationship. She said Trudeau told top Republicans and Democrats from the House and Senate on Wednesday that Canada is “certain” that the incentives, as currently formulated, would violate the USMCA.

“Do you really want to violate it in such a significant way so soon after its passage?” Freeland said. “That was one of the points we made. I think they heard us.”

The Biden administration disagreed Thursday with the Canadians’ argument.

“We don’t view it that way [as a violation of USMCA],” White House press secretary Jen Psaki told reporters. “In our view, the EV tax credits are an opportunity to help consumers in this country. It’s not the first time there have been incentives and tax credits for consumers, to lower prices for consumers [and] help incentivize a move toward a clean energy industry.”

Mexican Economy Minister Tatiana Clouthier in September wrote to U.S. lawmakers to express strong concern about the proposal. She specified that it was contrary to what the three countries agreed to in the USMCA and it should be “modified to include incentives for all North American content and assembly” consistent with the trade pact.

Trudeau declined after the summit to specify what kinds of solutions Canada was seeking as the U.S. legislative process played out. But he argued the plan would hurt jobs in both countries.

“This approach that they’re proposing will not only be bad for Canada, but will also be bad for the United States,” he said.