Exoneration Is ‘Bittersweet’ for Men Cleared in Malcolm X’s Murder 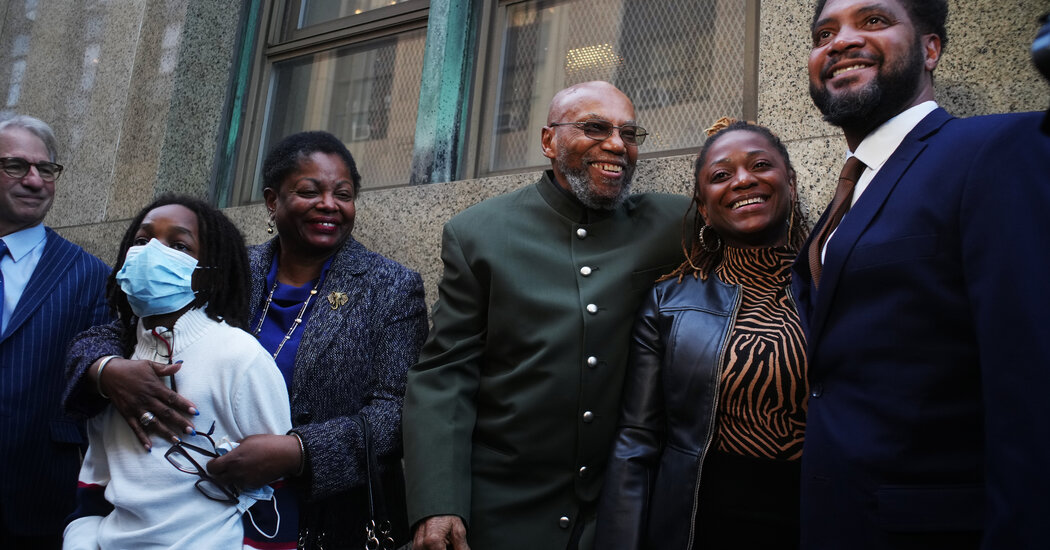 Muhammad A. Aziz stood up in a New York City courtroom on Thursday, 55 years after he and two other men were found guilty of murdering Malcolm X, and began to speak.

Minutes later, he would walk out of the courtroom an innocent man in the eyes of the law, his conviction in the assassination of one of the most influential Black leaders of the civil rights era overturned by a judge. But first he addressed a silent room.

“I do not need this court, these prosecutors or a piece of paper to tell me I am innocent,” he said in a stern voice that did not shake or falter. “I am an 83-year-old man who was victimized by the criminal justice system.”

Mr. Aziz and his co-defendant, Khalil Islam, were exonerated on Thursday after a review initiated by the Manhattan district attorney, Cyrus R. Vance Jr., found that they had not received a fair trial. The investigation found that evidence pointing toward their innocence had been withheld by some of the country’s most prominent law enforcement agencies, and that at least some information was suppressed on the order of the longtime director of the Federal Bureau of Investigation, J. Edgar Hoover.

But Mr. Aziz, his lawyers and two of Mr. Islam’s sons made it clear on Thursday that they did not think it was a day for celebration, but a moment that reflected a profound injustice administered a half-century earlier in the same courthouse.

“I hope the same system that was responsible for this travesty of justice also takes responsibility for the immeasurable harm it caused to me,” Mr. Aziz said, adding that his conviction was part of a corrupt process “that is all too familiar to Black people, even in 2021.”

Ameen Johnson, noting the absence of his father, Mr. Islam, who died in 2009, called the hearing “good, but bittersweet,” adding, “I honestly didn’t think that I was going to live to see the day.”

The hearing rewrote the official history of one of the most infamous moments of the civil rights era, when Malcolm X was assassinated in 1965 by gunmen in an Upper Manhattan ballroom a year after leaving the Nation of Islam. The decision confirmed the doubts that historians have long held concerning the convictions of the two men, as one of their lawyers noted during the hearing.

“This has been an exoneration in plain sight for decades,” said the lawyer, Barry Scheck, the co-founder of the Innocence Project.

Along with Mr. Aziz and Mr. Islam, a third man, Mujahid Abdul Halim, was also found guilty in 1966, and his conviction stands. At the trial, he confessed to the murder. He said then, and has maintained, that the other two men were innocent.

The exonerations came after a 22-month review of Mr. Aziz and Mr. Islam’s convictions. It concluded what scholars had long argued: that the case against them was flawed from the start, based on conflicting witness testimony and a total lack of physical evidence.

“I regret that this court cannot fully undo the serious miscarriages of justice in this case and give you back the many years that were lost,” said Ellen N. Biben, the State Supreme Court judge in Manhattan who presided over Thursday’s hearing. As she granted the motion to throw out the convictions, the courtroom burst into applause.

Mr. Vance had earlier submitted a 43-page motion written with the men’s lawyers asking that the convictions be vacated.

The investigation, jointly conducted by his office and lawyers for the men, reviewed informant and witness accounts, conversations between police and prosecutors about undercover officers and reams of other documents. Some were newly discovered; some had been pored over publicly for years by historians, journalists and hobbyists.

One of the most explosive details in the motion to overturn the convictions was the revelation that Mr. Hoover had ordered the F.B.I.’s informants not to make their role known when talking with other law enforcement officials about the murder.

On Thursday, Mr. Vance apologized on behalf of all law enforcement and reflected on the erosion of public trust that occurred because of the wrongful convictions.

“What I am going to begin by saying directly to Mr. Aziz and his family, and the family of Mr. Islam, and of Malcolm X is that I apologize,” Mr. Vance said. “We can’t restore what was taken from these men and their families, but by correcting the record, perhaps we can begin to restore that faith.”

The audience at Thursday’s hearing included Ameen Johnson, 57, and his brother Shahid Johnson, 55. Their father, Mr. Islam, spent more than 20 years in prison before being paroled in 1987 and died in 2009. They had not been notified of the hearing ahead of time and had traveled to New York from Florida and Virginia, respectively, after hearing the news on Wednesday.

As tears welled in their eyes, the brothers described their father’s struggle to reconnect with society after his release from prison. Ameen Johnson said that he believes that the deaths of his father and his mother, Etta Johnson, were a “direct result of the stress and drama and trauma” of the wrongful conviction.

“The effects of this removed them from our lives,” Ameen Johnson added. It also affected his own childhood, he said, as others often branded his father as a “killer” and he sought to defend Mr. Islam against that portrayal.

In the courtroom, one of the men’s lawyers, David Shanies, described Mr. Aziz and Mr. Islam’s shared experience, two “innocent, young Black men” who were rounded up by the authorities and wronged by a system that withheld evidence of their innocence.

“These men became victims of the same racism and injustice that were the antithesis of all that Malcolm X stood for,” Mr. Shanies said, adding, “Nothing can give back these men or families the decades of freedom that were stolen from them.”

The news this week that the two convictions were expected to be thrown out spurred waves of reaction from the public, historians and civil rights leaders, who expressed disappointment at the length of time it took for the record to change.

On Thursday, one of Malcolm X’s daughters, Ilyasah Shabazz, who watched as her father was assassinated, demanded that his true killers be identified and brought to justice.

Mr. Vance first took up the case in January 2020, after meeting with Mr. Aziz and his lawyers from the Innocence Project and lawyers who work with Mr. Shanies, a civil rights lawyer. While clearing the names of Mr. Aziz and Mr. Islam — who were enforcers in the Nation of Islam when Malcolm X left the sect in an acrimonious split but insist they were not even in the ballroom when the murder occurred — the review did not pinpoint who was responsible for the assassination.

Though it found no evidence the killing was orchestrated by the government — a popular conspiracy theory — it also did not answer broader questions about the role of the Nation’s leadership, the police and the federal government in the assassination.

On Thursday, Mr. Scheck called for officials to undertake a broader investigation “with greater access to evidence to get the history right.”

He said that the suppression of exculpatory evidence by F.B.I. and police officials served to inflict immeasurable damage to the lives of the two wrongfully convicted men — and altered the record of a moment that still holds deep significance five decades later. If the investigation into Malcolm X’s assassination had been conducted properly, “it would have changed the history of the civil rights movement in this country,” Mr. Scheck said.

The wrongful convictions allowed others to escape accountability, compounding the tragedy of a killing that silenced one of America’s most influential Black leaders — a man whose words and ideas still reverberate in contemporary social justice movements.

The men who some historians say were the actual assassins are dead, as well as the witnesses who testified and the police officers who handled the case.

“We still have a system that works to oppress some and protects other,” Vanessa Potkin, the director of post-conviction litigation at the Innocence Project, said on Thursday. “What would the world be if this assassination had not taken place? What would Mr. Aziz and Mr. Islam’s lives have been if the last 55 years had not been robbed from them or their families?”