Facebook’s ‘Metaverse’ Must Be Stopped 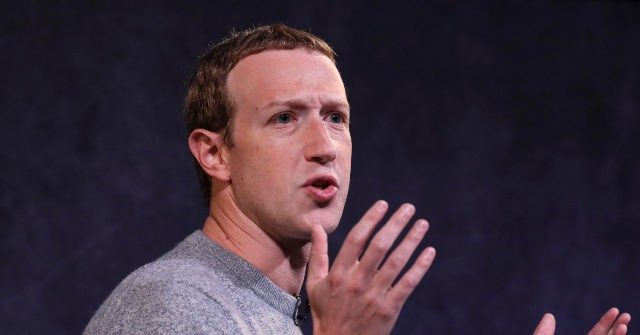 Leftist magazine Jacobin has taken aim at Facebook (now known as Meta), stating that the company’s new digital metaverse must be stopped. The magazine claims Mark Zuckerberg has just found another way to “colonize our lives in the name of profit.”

In an article titled “Facebook’s ‘Metaverse’ Must Be Stopped,” the leftist publication Jacobin takes issue with Facebook’s digital metaverse project, stating that the new online world is just another attempt to “colonize our lives in the name of profit.”

Facebook CEO Mark Zuckerberg is applauded as he delivers the opening keynote introducing new Facebook, Messenger, WhatsApp, and Instagram privacy features at the Facebook F8 Conference at McEnery Convention Center in San Jose, California on April 30, 2019. – Got a crush on another Facebook user? The social network will help you connect, as part of a revamp unveiled Tuesday that aims to foster real-world relationships and make the platform a more intimate place for small groups of friends. (Photo by Amy Osborne / AFP) (Photo credit should read AMY OSBORNE/AFP/Getty Images)

The author of the article, the interestingly-named Paris Marx, notes that a key pitch for the metaverse has been that it can act as a place to not only play and socialize but to work and host meetings. But Marx worries that this could be a negative thing, stating:

As the recent Microsoft announcements and Facebook’s own Horizon Workrooms demonstrate, applications for work are considered central to the metaverse, but why the sudden interest in virtual office environments? During the pandemic, many workforces, including those in tech, went remote to reduce the spread of COVID-19, but now many workers don’t want to go back. Employers deployed a whole range of software to track their employees since they weren’t in the office and metaverse applications would offer new and improved ways of doing that. If you can’t be in the physical office, you’ll be expected to be present in the virtual one — and monitored every minute you’re there.

But the transformation could be much more significant than an expansion of surveillance. Companies like Uber and Amazon not only rolled out algorithmic management systems through the 2010s to limit workers’ autonomy and increase production targets, but they also expanded the number of workers engaging in piece work through the gig economy and platforms like Mechanical Turk. Ball writes that the metaverse will be “the next great labour platform,” while Zuckerberg said it will give “people access to jobs and more places, no matter where they live.”

Marx further notes that Silicon Valley firms tend to have a “move fast and break stuff” attitude, which can be beneficial to developing products and services but costly to lives of those affected by an entirely new ecosystem like the metaverse. Marx writes:

Silicon Valley tends to feel it can do whatever it wants. Its major companies have ignored regulations with little consequence and shaped how we communicate to increase profits despite causing social harm. As the pressure for the metaverse to become reality grows, we need to be ready to oppose it. But we should also start thinking beyond the tech industry’s visions for technological solutions that serve their business interests and instead imagine how tech can be developed for the public good.

Lucas Nolan is a reporter for Breitbart News covering issues of free speech and online censorship. Follow him on Twitter @LucasNolan or contact via secure email at the address [email protected]