‘I had to pray that it was going to fit’ 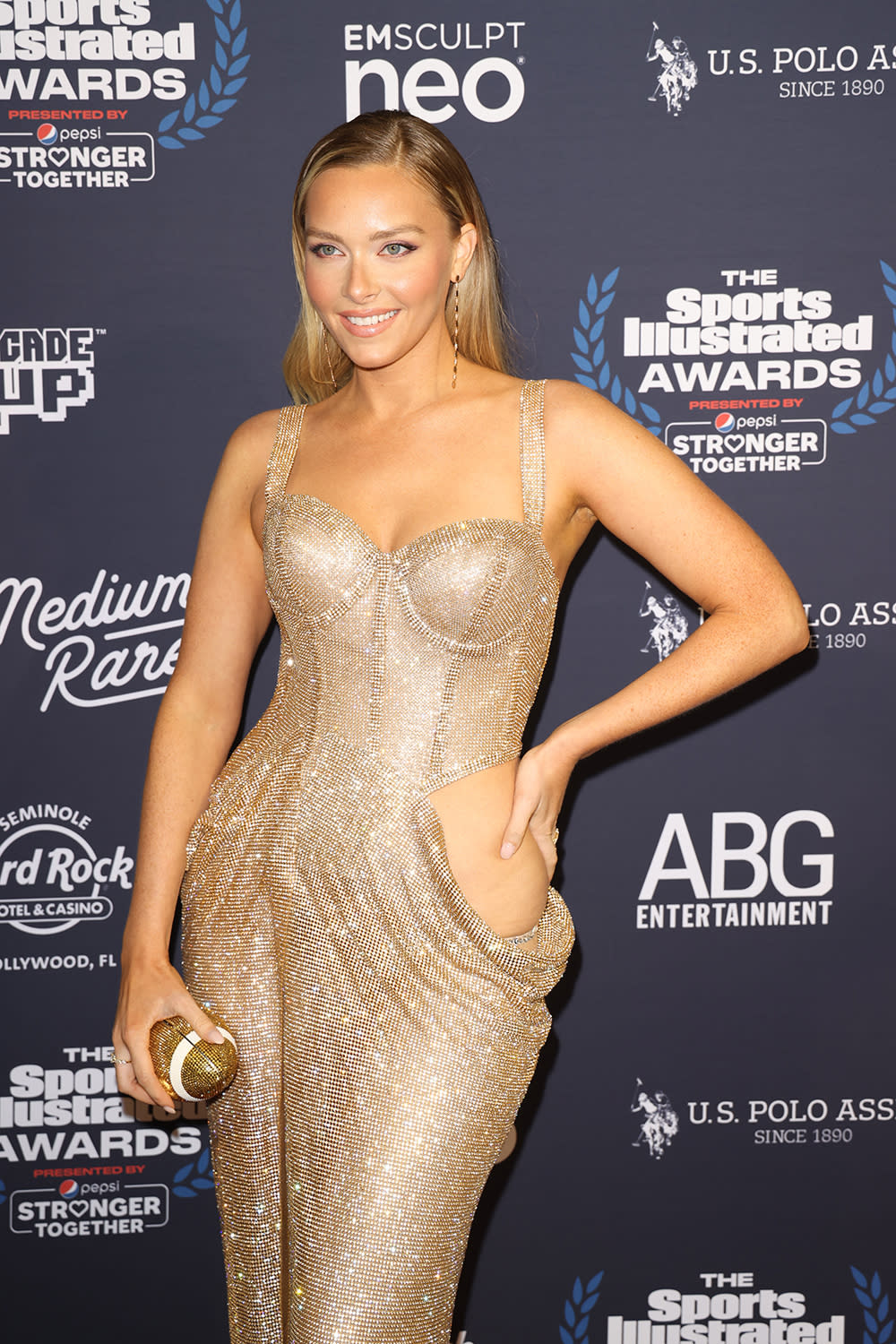 Camille Kostek knows a thing or two about heating things up.

Right before 2021 officially came to an end, the Sports Illustrated Swimsuit model attended the SI Awards in Florida with her longtime boyfriend, Tampa Bay Buccaneers tight end Rob Gronkowski. The former cover girl made jaws drop when she rocked a golden cutout gown by celebrity fashion designer Usama Ishtay that proudly flaunted her assets. The 29-year-old completed the look with a football-shaped clutch.

Fast-forward to 2022, and the star is already making a big splash with new episodes of TBS’ “Wipeout,” where she serves as a field host. The extreme obstacle course series, hosted by John Cena and Nicole Byer, was previously the top new show during the summer of 2008. It amassed an international following that has resulted in several spin-offs and specials, including this latest popular rendition.

Kostek spoke to Fox News about the daring dress she famously wore, what’s it like hosting “Wipeout,” and how she’s breaking a sweat in the new year.

Fox News: You recently attended the SI Awards in Florida and rocked a dress that was gorgeous, but also daring. What’s the story behind that gown?
Camille Kostek: You get the best times from spontaneous decisions and that’s exactly what that dress was. It was going to be the end of 2021. That was going to be my last carpeted appearance of the year.

Rob and I were going to be together at the event, which is very rare since he was in football season when the award show happened. So I wanted something that was going to be a very wow moment. I wanted to feel very glamorous, especially knowing that there weren’t going to be any holiday parties that year.

I wanted a wow dress. I wanted to end the year with a bang. And there’s this designer that I’ve been admiring for a while. I got in contact, and I had this vision of the dress, and it was brought to life. I had never tried the dress on before I landed in Tampa. About three hours before the show, I got my hair and makeup done. I then put on the dress and I had to pray that it was going to fit.

And it fits so perfectly. I’d never tried it on before, so I wasn’t sure how it was going to fit my body. It was all done over Zoom in terms of measuring every little inch of my body. But it fits so perfectly. It was a big risk. I had a backup dress just in case, but it looks nothing like this. This is a glamorous, sparkly, hip-bearing, risqué dress. That’s what really happened. It was all or nothing. So I’m very happy that it came together.

Fox News: Speaking of the new year, a lot of people want to jumpstart their health goals in 2022. It’s no secret you’re a big advocate of dancing. What are some tips or tricks you would give to someone who wants to break a sweat but also have fun?
Kostek: Oh, that’s easy. Everyone can dance. It doesn’t mean that you’re good. But everyone can get their body moving and have a good time. For me, when I’m not in the mood to work out, I love doing what I call dance cardio.

I’m not a fan of running. I don’t like hitting treadmills or an elliptical … For me, I just love putting on music and clearing some floor space. It doesn’t even have to be a gym. You just want to dance and get that body moving … It’s so much fun and freeing. We all have that little kid inside of us. And I think it’s the most fun way to get moving and bring a smile to your face. Put on a couple of your favorite songs, and you’ll be dancing for 15 minutes straight.

Fox News: When you look at your 2019 cover for SI Swimsuit, what goes through your mind?
Kostek: Just wow. For me, it would be that the only limitations that people have in their lives are the ones that they set for themselves. I would say that’s something I learned from myself. When I look at that cover, it’s like, wow, the second you start to fully believe in yourself, you can achieve your dreams.

I stopped comparing myself to other people, especially in an industry that’s so easy to compare yourself with other people when it comes down to modeling and the way you appear in your body, especially in a swimsuit. The second that I let go of those fears and limits, I was able to achieve my dreams, like appearing on that cover.

That’s a message I want to share with everybody. Stop limiting yourself. Be daring, be bold, be brave and believe in yourself. The best things come out of that, and you grow closer to your truer self. I think the best things come out of pushing boundaries. So every time I see that cover, I see someone who believed in herself. She believed that she could, she went for it and look what happened. To this day, I still love talking about it because I get those euphoric feelings as if it happened yesterday. So my message? Go for it.

Fox News: “Wipeout” has new episodes in time for the new year. How exciting is that for you?
Kostek: I love it. I have so much fun on set. It’s exciting for me to watch those episodes because I get to remember how everything went down, and I can relive that excitement I felt. So I always look forward to it. And I love that it’s a family show. I can get my friends together, my boyfriend, even my family, especially the nieces and nephews who are so young. Everybody gets to watch and enjoy it together.

Fox News: Looking back, what was it about “Wipeout” that made you want to get involved?
Kostek: As soon as I saw the headlines that a revival was coming back on TBS, I knew I had to get involved somehow, whether as a host or a contestant who gets to go on the obstacle course. There was no doubt, no hesitation.

So I was very, very excited when they asked me to be one of the hosts because I’ve been having so much fun. I get to go to work every day, talk with contestants and share their stories. I get to laugh or sometimes even cry – always happy tears. I feel very lucky to have this job. I’m very happy “Wipeout” came back.

Fox News: You’re a field host, but would you ever consider competing at some point, even if it was a one-night-only event?
Kostek: Absolutely. I think we should have a host episode and no one teams up. I think it should all be individuals running the course (laughs).

I would have to say that I would do it. But I would only do it if I was challenged, and I had to prove something to myself and other people. Maybe it would be something like how long I can last after you close the door and turn off all the lights. So it wouldn’t take much. I just can’t promise how long I would be able to last without wanting to cry or find the light (laughs).

Put Down Your Pencils: The SAT Is Going Digital