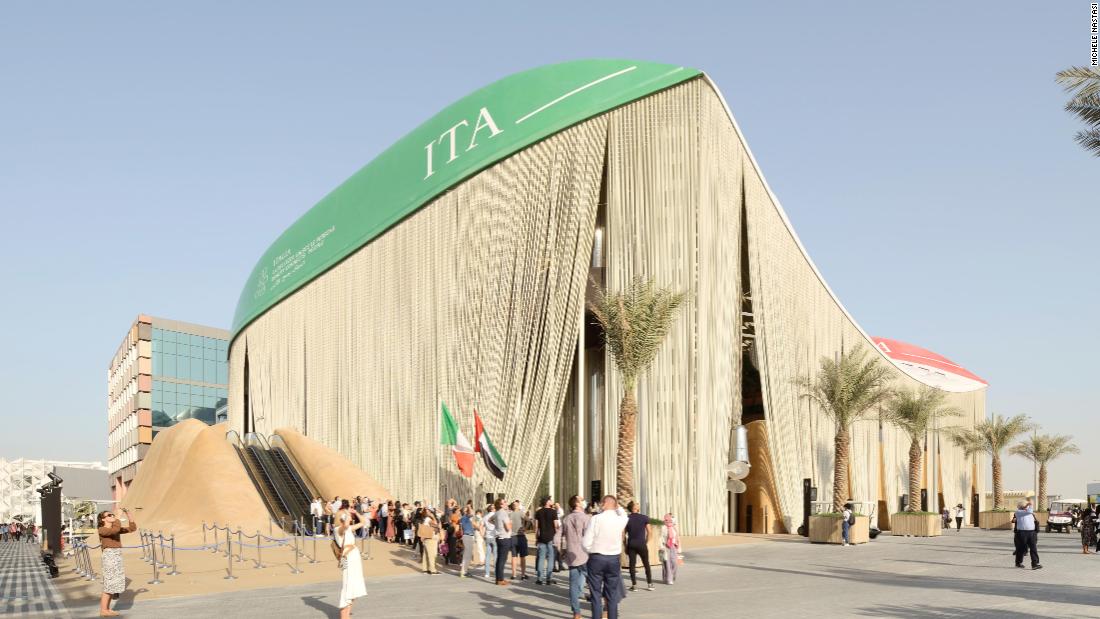 With three full-size, seaworthy boat hulls as its roof and a facade of nautical ropes made from recycled plastic, Italy’s pavilion at Dubai Expo 2020 embraces the concept of reusable design.

Favored by an excellent placement within the Expo site — between the “Opportunity” and “Sustainability” thematic areas and with uninterrupted front and side views — the pavilion attracted a fifth of the overall visitors to the event in the opening weeks, making it one of the most successful.

“The biggest inspiration behind our design is the circular economy,” said architect Italo Rota, referring to the idea of recycling, repairing and reusing waste materials, rather than simply disposing of them.

Rota is one of the designers of the pavilion, and has worked extensively in Paris where he curated the lighting of both the Notre-Dame Cathedral and the banks of the Seine River. “The nautical ropes themselves are an example of it (the circular economy): they were produced through the recycling of 2 million plastic bottles and, when combined, they reach a length of 70 kilometers (43 miles). These are already planned for further recycling after the Expo.”

Expo 2020 Dubai is now open, revealing a spectacular array of pavilions, many designed by world-famous architects. The UAE pavilion, designed by Santiago Calatrava, is a sight to behold, shaped like a falcon — the country’s national bird — in flight. The structure is topped by falcon-wing shapes made of carbon fiber and fitted with solar panels. Credit: Karim Sahib/AFP/Getty Images

Reducing the amount of waste at the end of the event was also a priority for co-designer Carlo Ratti, an architect and engineer who teaches at the Massachusetts Institute of Technology. “One thing I do not like about temporary events — like various international exhibitions or the Olympic Games — is that a huge amount of waste ends up in landfills after just a few weeks or months. This is why we wanted the Italian Pavilion to address the temporary nature of the Dubai Expo 2020. Most architectural elements are recycled or recyclable, reused or reusable.”

Both Rota and Ratti have previous experience with World Expos, having worked on projects for the last edition, held in Milan in 2015. The current exhibition, which was postponed from opening last year due to the pandemic and therefore retains its “2020” moniker, will remain open in Dubai until the end of March 2022.

The pavilion incorporates reusable design into its structure — via the use of organic elements such as orange peel and coffee grounds in the construction materials — and has a natural climate mitigation system that uses shading, misting and ventilation to replace air conditioning. There are no conventional walls, with the nautical ropes delineating the exhibition space instead, and also functioning as a multimedia surface through the use of LEDs that light up to display different colors and images.

After entering, visitors find themselves on a skywalk 36 feet (11 meters) above ground level and right below the first hull.

Among the attractions are the “Belvedere,” a domed structure covered with wild Mediterranean herbs and meant to evoke Renaissance gardens, and a 3D-printed replica of Michelangelo’s famous David statue, made from detailed scans of the 16th-century original in Florence. The 17-foot figure spans two floors and its lower half is encased in a rotunda, somewhat limiting the view of it in favor of its head and upper torso. “We find it to be a stimulating idea for visitors to look at the David not just from the bottom up, as it happens with the original in Florence, but straight into his eyes,” says Ratti.

In the spirit of experimenting with different ways to bring the natural and artificial worlds together, the structure rests on a 16-feet-tall dune, made of locally sourced sand. The paths and walkways inside are adorned with 160 botanical species, a project jointly developed with botanists at Italy’s National Research Council.

The boat hulls that form the roof were built by Fincantieri, one of Europe’s largest shipbuilders, and there is a possibility that they could eventually be turned into actual functioning boats, says Ratti.

However, there are ongoing conversations about transforming the pavilion into a design center when the World Expo ends. “So the boat hulls might become victims of their own success,” Ratti says, “and it might take longer before they set sail.”