Left Melts Down over McCarthy’s Speech Against ‘Build Back Better’ 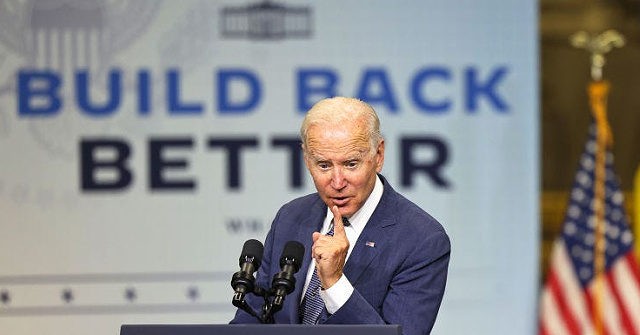 Leftists raged on Twitter in response to a landmark speech from House Minority Leader Kevin McCarthy (R-CA) knocking President Biden’s “Build Back Better” agenda as a socialist bill that will tax Americans into oblivion, delivering them into a bureaucratic state subservient to Communist China.

“It’s okay. I’ll be here a long time,” McCarthy told Democrats as they pleaded with him to start the vote. “I think I’m upsetting other people on the other side of the aisle by telling them what’s in the bill. They just yelled at me that they’re leaving.”

Every page of the Democrats’ Socialist Spending Scam will be paid for by or borrowed from you: America’s hardworking taxpayers.

This is the single most reckless and irresponsible spending bill in our nation’s history. https://t.co/OCJJ0XaXzU

Left-wing lawmakers and various media figures depicted the moment as a shrewd McCarthy positioning himself as a Republican leader while pushing an extreme right-wing agenda that would deprive the American people of life-saving programs.

Thank you @GOPLeader McCarthy for publicly confirming your desire to reward neo-nazi members of Congress who incite violence against women under GOP leadership!

I appreciate your clarity.
And predictability.
Thank you for no longer pretending to distance your caucus from this 🚮 https://t.co/xxpw9u8Unj

Looks like @GOPLeader is auditioning for a job that his Qanon caucus will never let him have, they will nominate Trump or Jim Jordan for Speaker of the House if they get the chance and he is just making a clown of himself for nothing.

The @GOPLeader wants to go back?

Where were we ten months ago?

No thanks. Let’s build back better.

Two hours into Kevin McCarthy’s unhinged diatribe obstructing passage of the Build Back Better Act, Albert Einstein comes to mind: “If people only talked about what they understood, Earth would be a very quiet place.”

Is there an English translation for @GOPLeader McCarthy Floor speech?

What we are witnessing from Kevin McCarthy and the GOP right now is the biggest attack from the House floor against American families and working people in history. It says everything about the party that *this* is what set them off.

Kevin McCarthy has now shown more anger about making child care affordable than he has about the insurrection on January 6th. https://t.co/HNA5lyAlLv

Kevin McCarthy has been ranting about #BuildBackBetter for over an hour. This is what he does when he has no agenda. Kevin and his conference haven’t presented a single alternate idea to create jobs and cut costs for working families. Democrats deliver and Kevin talks.

Kevin McCarthy is not a serious person pic.twitter.com/YyAp31V5rp

Kevin McCarthy is a tantrum in search of a cause

If you took the worst orator in the world

Gave him the worst speech in the world

That would be a lot like listening to Kevin McCarthy tonight.

This bears repeating. McCarthy, who House Republicans chose as their Leader, is ranting and blathering about everything other than the specifics of the bill he’s filibustering—because it’s loaded with popular policies that would make life better for everyone. https://t.co/8brB9rUbsf

Kevin McCarthy is talking non-stop in the House trying to prevent the passage of the Build Back Better Act which will help MILLIONS of Americans.

House Speaker Nancy Pelosi’s office: “We’re glad we’re not the only ones who can’t follow Minority Leader McCarthy’s meandering rant that has nothing to do with the Build Back Better Act.”

It is very, very telling the full House Republican Caucus is not sitting on the House floor tonight getting McCarthy’s back, applauding, affirming.

Parties show up for important leadership moments. The GOP isn’t there for McCarthy tonight.

I wish Kevin McCarthy loved delivering for working families as much as he loves the sound of his own voice.