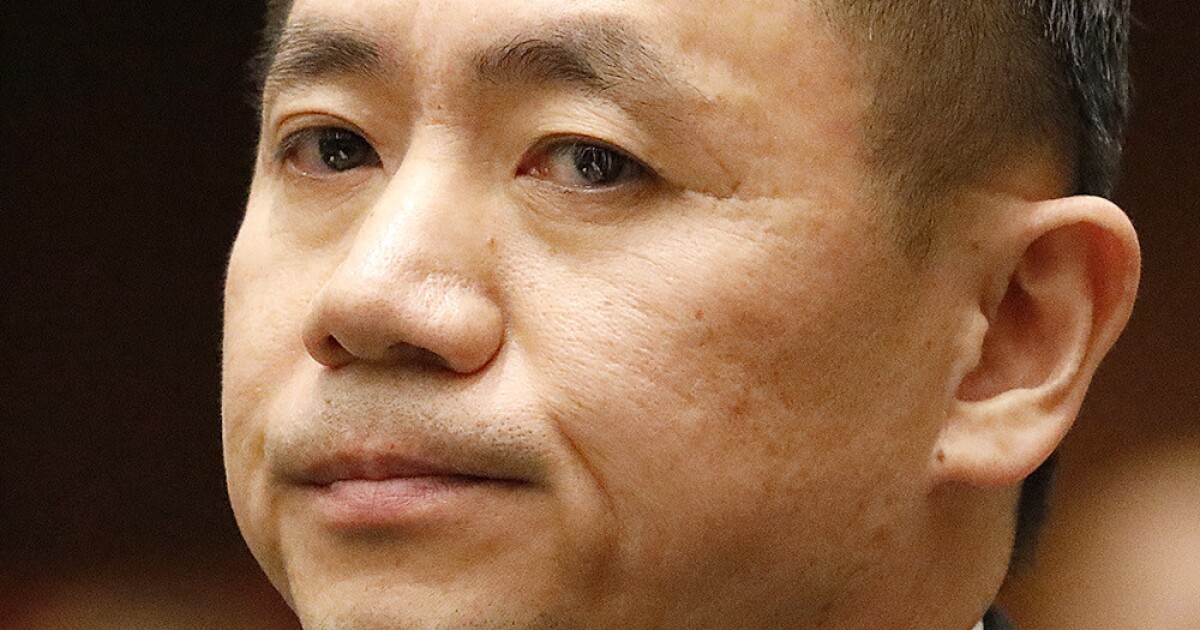 Spread the love
more
The fate of the first law enforcement officer to be prosecuted in an on-duty shooting in Los Angeles County in 20 years is now in the hands of a jury.

Closing arguments wrapped up Thursday morning in the manslaughter trial of L.A. County Sheriff’s Deputy Luke Liu, who could face up to 11 years in prison for fatally shooting Francisco Garcia in a Norwalk gas station in February 2016.

Liu pulled his cruiser into a 7-Eleven parking lot near Alondra Boulevard and Studebaker Road because he believed Garcia, 26, was driving a stolen Acura. After a brief interaction, Garcia tried to speed off but Liu chased him on foot and opened fire, shooting the man in the back four times. Liu tried to perform lifesaving measures at the scene, but Garcia died a short time later.

The deputy claimed that he was struck by Garcia’s car and was in fear for his life because he believed the driver was reaching for a weapon. But several witnesses have said the car did not make contact with the deputy, and an emergency room doctor testified earlier this month that Liu suffered no significant injuries during the altercation. Detectives did not find a gun in Garcia’s possession or inside the car.

Defense attorney Michael Schwartz has countered that Garcia’s movements gave Liu reason to believe the 26-year-old had a weapon, meaning his decision to fire in self-defense was reasonable.

Photos from the scene show a pipe and metal steering wheel lock in the vehicle. While there’s no evidence indicating Garcia was trying to use either against the deputy, Schwartz said Liu started firing when he was standing at the driver’s side window and saw Garcia’s hands move in that direction. Witnesses have testified that Garcia was reaching for the car’s gear shift, but Schwartz argued all that matters was Liu’s perception in the moment that Garcia might have been reaching for a deadly weapon.

“You’re supposed to interpret things not with 20/20 hindsight, but with the perspective of a reasonable officer on the scene,” Schwartz said to the jury.

Schwartz has also repeatedly cited the fact that there was a murder in the gas station the night before the shooting as reason for Liu to have been in fear for his safety, though he has acknowledged there is no evidence connecting Garcia to the prior killing. The car Garcia was driving was stolen, but neither side presented evidence that Garcia stole it.

Several witnesses testified that Garcia did not strike Liu with his car and was attempting to flee from the deputy rather than harm him. Retired Los Angeles Police Department Capt. Greg Meyer, a use-of-force expert who normally testifies on behalf of police officers in court, took the stand earlier this week and heavily criticized Liu’s tactics on the day of the shooting.

Meyer said Liu’s actions violated L.A. County Sheriff’s Department policy and generally accepted police practices that advise against shooting at moving vehicles when a suspect is unarmed. He also said Garcia did not pose an imminent risk to anyone in the gas station, including the deputy.

“Deputy Liu stated that he was injured when Garcia’s car hit him, however the single photograph provided by Liu himself appears to document [minimal] injury, if anything,” Meyer said. “It is clear that Garcia was trying to escape, however, there appears to have been no serious risk to the deputy or the public if Garcia got away.”

Meyer also cast doubt on Liu’s rationale that he feared for his life because he believed Garcia was reaching for a weapon, asking why the deputy did not take a defensive posture or react in any way before running after the car and opening fire.

Liu did not take the stand in his own defense. The lone witness Schwartz called was the former second-in-command of the San Bernardino County Sheriff’s Department, Robert Fonzi, who now serves as a use-of-force expert.

Fonzi testified that Garcia’s decision to flee and his suspicious movements would have been enough to justify Liu’s fear that his life was in danger, noting that California law does not require police to wait to see a weapon before using lethal force.

“If they wait until they see a gun or a weapon, the officer likely won’t go home,” Fonzi said. “He is reacting to the actions of Mr. Garcia and the vehicle, and based on those actions he responds in a manner that he believes is reasonable.”

Former Dist. Atty. Jackie Lacey filed charges against Liu in 2018, marking the only time she moved to prosecute a police officer in an on-duty shooting during her eight years in office. Despite years of calls for Los Angeles-area law enforcement to be held accountable in shootings, and recent large-scale protests calling for criminal justice reform in the wake of George Floyd’s murder by a Minneapolis police officer last year, Liu’s trial has been a relatively muted affair.

When Liu was first charged, deputies lined a courtroom in support of him. But for most of the past two weeks, the gallery has been nearly empty. A few people have filled the seats reserved for law enforcement, presumably in support of Liu, but they refused to speak with a Times reporter or identify themselves when approached earlier this week.

Maria Luz Ruiz Partida, Garcia’s mother, has been in court every day, coming downtown directly after working a 6 a.m. shift at her accounting job. The Norwalk woman has followed each piece of testimony and evidence intently, sometimes with tears in her eyes as prosecutors replayed the grainy video of her son’s death or flashed an image of Liu crouched over Garcia’s bloody body laid out on concrete.

Ruiz Partida says she’s been frustrated that her son’s death seemingly went ignored by the protesters who criticize police for fatal shootings, but also acknowledged she hadn’t spoken out about his killing until this week for fear it might impact the criminal case or spark demonstrations that “would turn into something ugly.”

Ruiz Partida said that while her son had been arrested in the past and had some problematic friends in Norwalk, he “would never hurt anybody” and posed no danger to the deputy. Ruiz acknowledged that her son had a criminal past, and court records show he had multiple convictions for burglary, drug possession and driving without a license between 2010 and 2012. But he’d never been convicted of a violent crime, records show.

Ruiz said her son was a family-driven man who enjoyed weekend barbecues and dinners with his family, gave long, handwritten birthday cards to his mother and had completed a GED program shortly before his death so he could try to build a better life for his daughter, who was 8 years old at the time of the shooting.

“He was very loving, he was loved by a lot of people, his friends and family, all of his family. … Now he’s very missed,” she said.

While she was surprised and relieved when Lacey filed charges against Liu, Ruiz said, she’s hesitant about allowing to allow herself to believe the deputy will actually be convicted.

“I still don’t know if I should like expect for something to be done,” she said. “I’m still not wanting to make myself hopeful.”