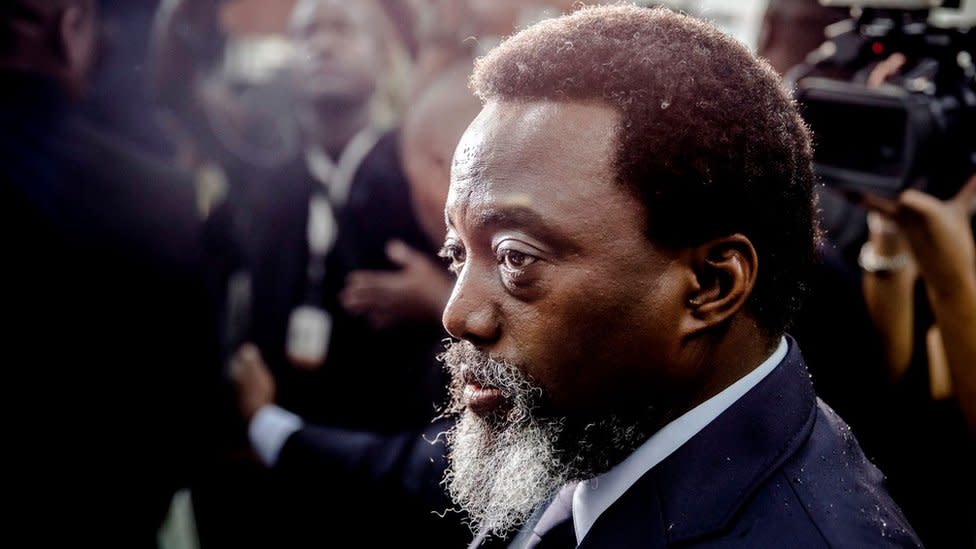 Companies owned by family and friends of former Democratic Republic of Congo President Joseph Kabila had millions of dollars of public funds funnelled through their bank accounts, according to Africa’s biggest data leak.

The money was transferred to the companies’ accounts at the Congolese arm of the BGFI bank.

Millions of dollars in cash were then taken out of the accounts.

Mr Kabila was president at the time of the bank transfers.

He has declined to respond to our questions over the transfers.

The leak included more than three million documents and information on millions of transactions from the BGFI (Banque Gabonaise et Française Internationale) bank, which works in several African countries and France. Online French investigative journal Mediapart and the NGO Platform to Protect Whistleblowers in Africa (PPLAAF) obtained the information.

BBC Africa Eye had access to the evidence, as part of a consortium called Congo Hold-up, co-ordinated by the media network European Investigative Collaborations (EIC).

The investigation raises questions about who benefitted from the money transfers and possible conflicts of interests.

The oil firm with no oil

One privately owned company, Sud Oil, was shown to have received nearly $86m in public funds from November 2013 to August 2017.

These include at least $46m from the DR Congo banking regulator, BCC, $15m from the state mining company Gécamines, and $1.3m from the country’s electoral body, Ceni.

The only information the BBC found from the leak concerning these payments was an invoice for just over $1m from Ceni to Sud Oil for petroleum products.

The BBC found no evidence Sud Oil was trading in petroleum products at the time.

Millions of dollars were transferred out of Sud Oil’s BGFI accounts to other private companies’ BGFI accounts. Some of these were owned by relatives or business associates of Mr Kabila, who was president from 2001-2019.

One of these companies, Kwanza Capital, was majority owned by Congolese businessman Pascal Kinduelo, with Sud Oil taking a minority stake. Mr Kinduelo was chair of BGFI Bank RDC at the time.

Mr Kinduelo was also a former owner of Sud Oil, before transferring ownership.

The investigation found the bank allowed many high-value cash withdrawals from Sud Oil accounts, including one for $6 million. By law a maximum of $10,000 is allowed to be withdrawn in cash per day. This limit can only be breached for specific, documented purposes, such as national emergency or defence reasons.

BBC Africa Eye found no evidence in the leak that correct procedures were followed in these instances. These cash withdrawals from Sud Oil accounts totalled at least $50 million covering a four-year period. Once the money was withdrawn, it is believed to have become untraceable.

Our investigation was only able to establish that Sud Oil, for the period 2013 to 2018, had one employee, managing director David Ezekiel, and a small office in the capital Kinshasa as its address. In October 2013 Sud Oil purchased a real estate complex in the capital for $12 million, basing the company there.

It also had a contract with BGFI Banque RDC to provide new vehicles to several of its senior management, including Mr Selemani. It charged $70,000 to provide his four-wheel drive car.

BBC Africa Eye found no evidence of any other business activities.

The investigation had access to an internal BGFI audit, completed in July 2018, heavily criticising the DR Congo operation. The audit was never meant to be made public.

It gave a score of “very high risk” for the DR Congo subsidiary. It also referenced a lack of integrity and transparency in the declaration of conflicts of interest and compliance in its operations with clients.

The audit named Mr Selemani as having at least 16 declared conflicts of interest, including links to private companies holding accounts at the bank. It also highlighted several high-value transactions by Sud Oil.

Two weeks after the report was complete, Mr Selemani was moved to a new role at BGFI’s head office in Gabon. He reportedly received $1.4m on leaving BGFI Banque RDC. He is reported to have left BGFI in November 2018.

Sud Oil changed ownership in 2018 and Kwanza Capital was closed down the same year. Mrs Mteyu is understood to have given up her 40% stake in BGFI Banque RDC.

Gecamines and BCC did not reply to the BBC’s requests for a response.

The head of Ceni at the time of its dealings with Sud Oil, Corneille Nangaa, declined to comment on the payment, citing parliamentary confidentiality rules. Mr Nangaaa added that a new management team was now in place at the electoral body.

BBC Africa Eye’s investigation will be available online to watch from 29 November.