More free rapid COVID tests are coming. What we know so far 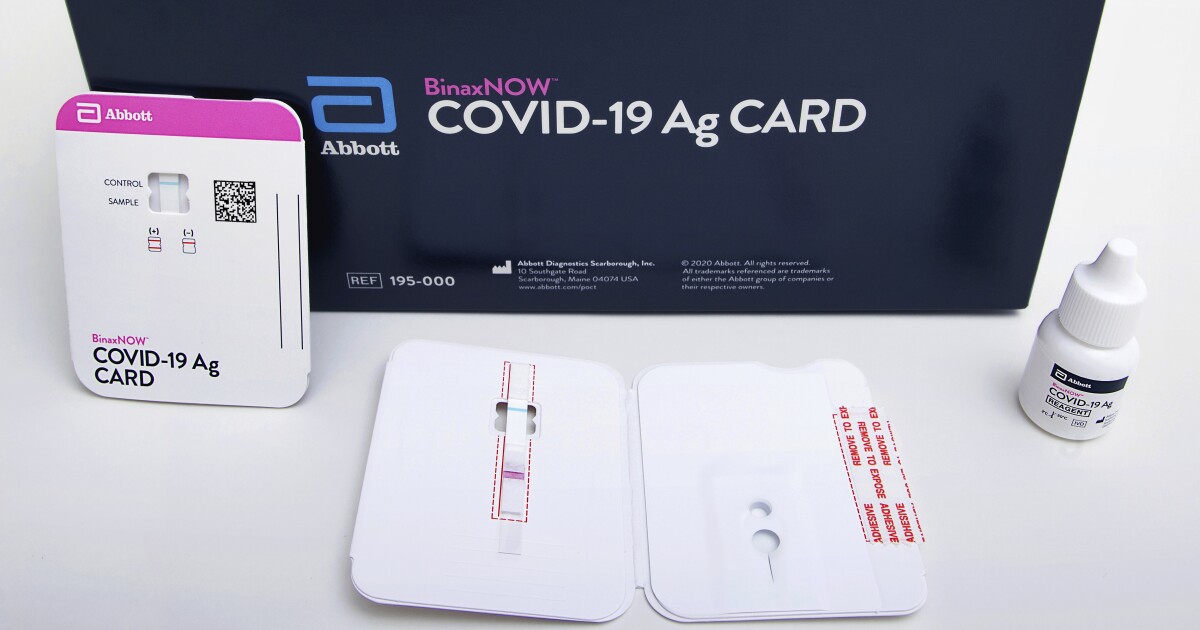 Spread the love
The demand for home COVID test kits is so great, they’re hard to find and increasingly hard to afford. But soon, people who have health insurance will be able to solve at least one of those problems.

The Biden administration announced Monday that insurers will be required to cover the cost of rapid home COVID tests for their customers, starting Saturday. The announcement fulfills one of the promises President Biden made in December, when he announced the plan to have insurers pay for the tests. The requirement will remain in effect until the national public health emergency ends (no expiration date has been set).

Exactly how the new order by the Department of Health and Human Services will work in practice will depend on the insurer involved; the insurers and pharmacies contacted this week said they were still working out the details. And it’s not clear whether the arrangement will ease the shortage of rapid tests, which have gone in and out of stock at local stores.

Here’s what we do know about the program, along with some tips for finding a rapid test at your insurer’s expense.

The administration’s order applies only to people who are covered by private health insurance or a group health plan, not people in Medi-Cal, Medicare or other public programs. For the uninsured, the administration has said it will supply up to 50 million home test kits to community health centers and, starting sometime this month, make 1 billion free home test kits available through a yet-to-be established website and hotline.

One other exception: According to HHS, the order applies just to the tests you buy for personal use. Insurers are not required to cover tests purchased for resale or “employment purposes.” So if your employer requires you to submit test results periodically, as some do, this program may not help you.

Insurers are required to pay for up to eight tests per covered person per month. That’s tests, not test kits, which typically include two tests per package. Regardless, it translates to one test every three to four days for each member of a covered family.

What tests are covered?

In March 2020, President Trump signed into law COVID-relief legislation that required insurers to cover tests done in healthcare facilities and pharmacies, with no out-of-pocket costs permitted. One catch was that there had to be a medical or public health reason for the test; if it was just for your peace of mind, insurers wouldn’t have to pay.

Last month, Biden extended the requirement to at-home tests. Under the guidelines issued by the Centers for Medicare and Medicaid Services on Monday, insurers will have to foot the bill for any federally authorized test sold over the counter (that is, without a prescription) that can be administered and processed at home, starting Saturday.

The Food and Drug Administration has authorized at least 17 rapid home tests, most of which are “antigen” tests that have sold for about $7 to about $16 per use. But also included are three molecular (also known as PCR) tests, which are more sensitive and far more expensive. They cost $75 or more for the first test.

The feds left the door open for insurers to cover only part of the cost of some tests — more on that below. But they cannot require you to obtain their prior authorization or to be screened first by your doctor. As long as the tests are for personal use by you and your household, they’re covered — even if you’re buying them just to have some reassurance.

How do I get my tests?

Ideally, you’ll be able to find them at your local pharmacy, show your insurance card and obtain them without charge, rather than paying for them and then asking your insurer to reimburse you. But the insurers, pharmacies and online retailers contacted this week said they were still working on their response to Biden’s order, and offered no specifics on their arrangements.

HHS has encouraged insurers to set up networks of preferred retail outlets where their customers can obtain tests with no out-of-pocket costs. Once they set up those networks, they’ll be able to limit the reimbursements they offer for out-of-network purchases to $12 per test or the actual cost, whichever is lower. Until they do, however, they have to reimburse their customers for the full price of the authorized home rapid tests they buy, wherever they buy them.

For the time being, your best option is to check with your insurer before buying a rapid test to see if it has a network of preferred retailers that impose no co-pays, as well as any limits it plans to impose on reimbursements.

Whether those networks emerge and become reliable sources of home tests depends on two factors. One is the ability of insurers and retailers to work out the sort of deal on test prices that they have on prescription drugs. The other is whether manufacturers can step up production and meet the demand for tests, which has outstripped the supply.

A number of manufacturers have said they’re ramping up production, and the Biden administration says it has used the Defense Production Act to help manufacturers obtain the materials they need to crank out the tests. Nevertheless, it has been easier to find tests online than it has been at local stores.

Insurers still have to cover the full cost of COVID tests done at local pharmacies, testing centers, clinics and other healthcare facilities — but only if the tests are done for certain medical or public health reasons. If you have no symptoms, haven’t been exposed to infected people and aren’t preparing to travel, you probably will have to foot the bill for a COVID test.

To locate a testing site near you, consult HHS’ online search tool. Although most of the testing sites offer PCR tests that take one to three days to produce results, the directory also includes some sites offering rapid antigen tests that deliver results within a few minutes, like the rapid home test kits do.

Los Angeles County is also making a limited number of free home test kits available at 13 regional centers for people to pick up and return. Unlike rapid home tests, however, these don’t deliver results right away. Instead, they merely give you the material needed to collect a nasal sample, which you’ll drop off at the testing center for analysis. Results will be available in one to two days, the county said.