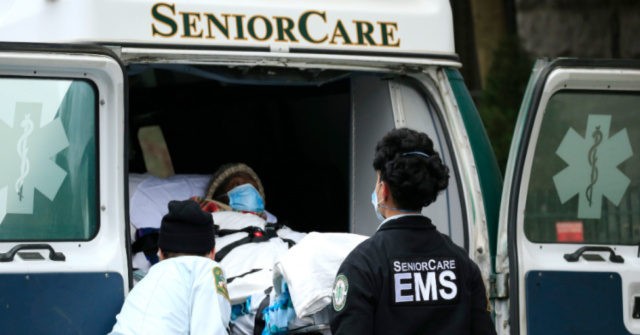 The New York Times delivered a dire statistic the day before Thanksgiving, admitting more people in the United States have died of the Chinese coronavirus this year, under President Joe Biden’s leadership, than last year, despite the widespread availability of vaccines.

The Times cited the Centers for Disease Control and Prevention’s (CDC) Tuesday figures, which reported 386,233 coronavirus related fatalities in the U.S. for 2021. In all of 2020, the U.S. recorded 385,343 fatalities. The former figure is only expected to rise, as there is still over one month left of the year.

Citing “experts,” the Times attributed the increased fatalities this year on a “confluence of factors,” focusing primarily on what it described as “crucially lower-than-needed vaccination rates, but also the relaxation of everyday precautions, like masks and social distancing, and the rise of the highly contagious Delta variant.”

Essentially, public health experts said, many Americans are behaving as though Covid-19 is now a manageable, endemic disease rather than a crisis — a transition that will happen eventually but has not happened yet.

Yet many are also refusing to get vaccinated in the numbers required to make that transition to what scientists call “endemicity,” which would mean the virus would still circulate at a lower level with periodic increases and decreases, but not spike in the devastating cycles that have characterized the pandemic. Just 59 percent of Americans are fully vaccinated, the lowest rate of any Group of 7 nation.

However, placing the blame on “lower-than-needed vaccination rates” appears to defy logic, as the vaccine has been widely available for the bulk of the year.

The same cannot be said for 2020, when the world was just beginning to discover what the virus was and where it came from. While the Trump administration moved to get vaccine production going via Operation Warp Speed, vaccines were not widely available to the entirety of the eligible population until this year. Even so, rollout has demonstrated that vaccinated individuals can still spread and contract the virus.

The Times also attributed the increased fatalities to the “relaxation of everyday precautions” — one of the key incentives officials touted to Americans during vaccine rollout, many of whom promised that vaccines would pave a way for Americans to return to a state of pre-pandemic normalcy. However, that proved to be false, as many localities, and blue states, reintroduced restrictions, including mask mandates, regardless of vaccination status.

That aside, Florida alone challenges the assertion that lax mitigation measures are attributing the spread and increased fatalities. The Sunshine State, whose Gov. Ron DeSantis (R) came under a flurry of constant scrutiny throughout the pandemic for prioritizing personal freedom and refusing to keep the state locked down, continues to have the lowest coronavirus case rate per capita in the nation.

It never had a statewide mask mandate in place, even at the height of the pandemic.

The Times’ own coronavirus tracker, last updated Wednesday, shows Florida reporting a daily average of 1,397 cases, or seven per 100,000 — the lowest per capita rate in the nation. Florida’s most recent figures reflect a five percent drop in cases over the last 14 days.

The state of Pennsylvania reported nearly 500 deaths from the Wuhan coronavirus in September — its third consecutive month of decline, according to PA Department of Health data. https://t.co/nCCQiHfTtx

States that reinstituted mandates, such as Illinois, are not faring as well, reporting a daily average of 4,599 cases, or 36 per capita. That represents an increase of 73 percent over the same time period.

Other blue states, including Michigan, New York, and Pennsylvania, are seeing similar trends.

“220,000 Americans dead,”  Biden said. ”If you hear nothing else I say tonight, hear this — anyone who is responsible for that many deaths should not remain as President of the United States of America.”