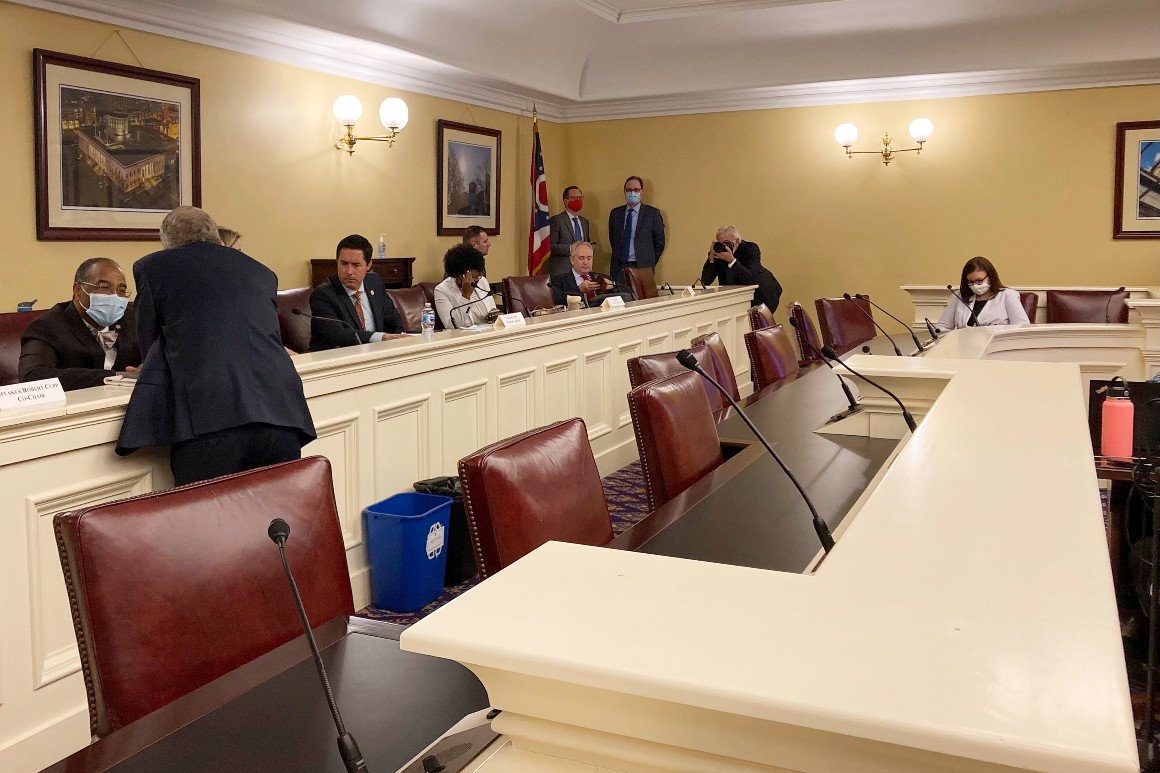 The goal of the amendment was to encourage lawmakers in both parties to work together in redistricting and produce maps that reflect the state’s political orientation. But the GOP, which controls every lever of state government in Ohio, is instead moving at break-neck speed on congressional lines that could favor the party in 13 of its 15 districts.

Democrats can only rail against the process — and vote no.

“The overwhelming mandate and desire in Ohio was to have fair maps. That’s what they wanted,” said state Rep. Richard Brown, the leading Democrat on the state House’s Government Oversight committee. “Well, that’s not what they’re getting. They’re getting the same old gerrymandered maps as they got in 2011 — and actually it’s probably worse now than it was in 2011.”

Read all coverage of the 2021 redistricting process

The congressional map proposal is on a less-than-four-day trek through the legislative process: First proposed in the state Senate on Monday night and passed on Tuesday, the bill is expected to receive an up-or-down vote in the state House on Thursday.

Republicans insist their maps are fair, despite Democratic opposition. State Sen. Rob McColley, who sponsored the bill in the state Senate, did not respond to a request for comment. But in a statement earlier this week, he bragged that the map keeps seven of the state’s eight largest cities — Cleveland, Cincinnati, Akron, Toledo, Youngtown, Dayton and Canton — wholly contained within one district each.

“Not since the mid-’60s have these seven major cities been whole, and for the first time in more than 150 years Cincinnati will be contained in a single district,” McColley wrote in the statement. “This is truly historic.”

But Democrats and other critiques of the map design refute his claims. The proposed map, which must account for the one district Ohio lost in reapportionment after the 2020 census, would keep deep-blue seats in Cleveland and Columbus, but targets the other two Democratic districts for defeat.

Democratic Rep. Tim Ryan is vacating his seat to run for Senate, but the new map eliminates what was a district now-President Joe Biden carried narrowly in 2020. Meanwhile, the GOP map would break up Democratic Rep. Marcy Kaptur’s current district, which snakes along the shore of Lake Erie to keep Democrats away from GOP held seats around it. Instead, the Lakeshore would be divided among red-leaning seats.

McColley, as the sponsor of the substitute bill, was questioned about the quality of his map at Wednesday’s state House Government Oversight Committee hearing. In addition to questions about the partisan advantage, he was asked about the combination of urban communities with Appalachian communities within a single district and how other counties were divided into different districts, including Hamilton County and its Black population.

Without any Democratic support, this map will only be allowed to be used for four years as opposed to the usual 10 years because of one of the new reforms. Brown, the top Democrat on the state House committee, said he believes Republicans might have been OK with using that loophole all along.

That’s because they redrew the state legislative lines using the same process: A party-line vote that, combined with the state’s political orientation — an increasing Republican lean, though still competitive — will likely keep the GOP in charge come 2025.

“The Republicans in Ohio have done absolutely everything they can to maintain their unearned supermajorities … so they can maintain power without ever being accountable to the people in this state,” said state House Minority Leader Emilia Strong Sykes. “It is not only harming our state, it is harming our democracy and devastating the public trust that people have in their government.”

Democrats are already telegraphing their intentions to sue if the map is approved, and the state court system is rife with cases regarding state legislative maps approved earlier this year, brought by the American Civil Liberties Union and other voting rights groups.

Good-government advocates also balked at the speed with which the state legislature is working. Catherine Turcer, the executive director of Common Cause of Ohio, said the latest Republican map couldn’t fully be evaluated before its first hearing, which was about 16 hours after it was released. And the initial bill was missing shapefiles for the redrawn maps, which are needed for analysis.

Earlier this year, hundreds of residents testified before the state Redistricting Commission, which redraws state legislature district lines, and participated in field hearings with state officials — but no one will be able to weigh in specifically on this congressional map before the votes this week.