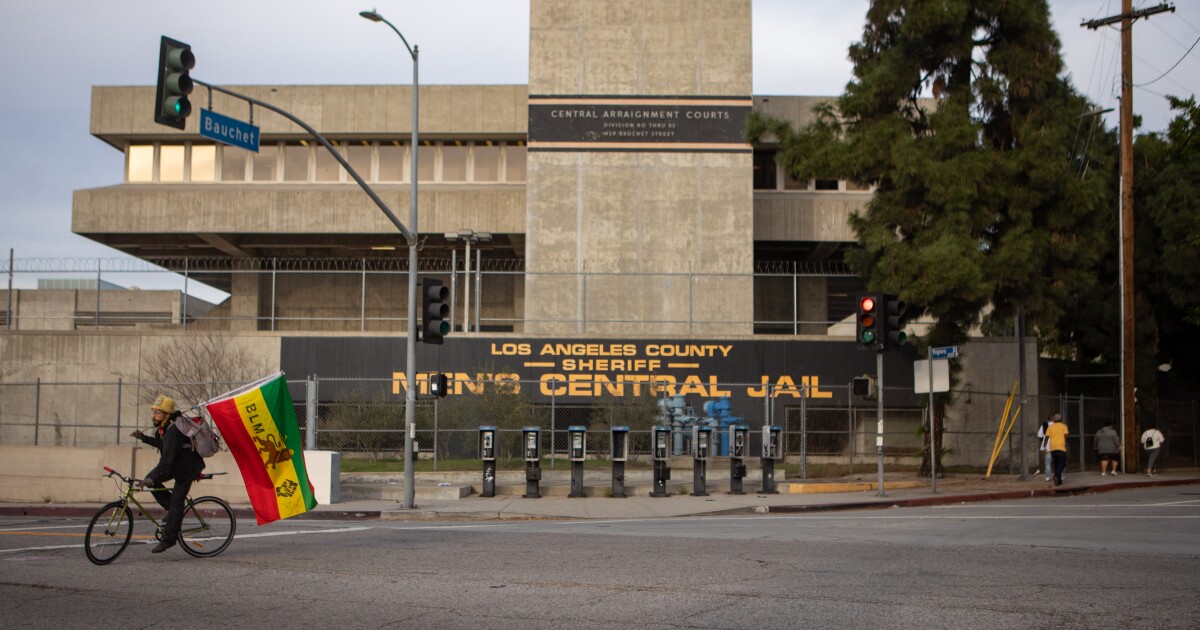 Spread the love
Many inmates with serious mental illnesses in Los Angeles County jails continue to suffer in isolation and with little treatment, more than six years after the sheriff’s department reached a settlement with the federal government.

The county remains out of compliance with the settlement’s main requirements — ensuring that inmates with serious mental illnesses receive regular treatment, out-of-cell time and safe housing, according to a court-appointed monitor.

In Men’s Central Jail, many cells were overflowing with garbage, and filth was spread on the walls, with a pile of razors abandoned in a hallway, the monitor, Nicholas E. Mitchell, said in a report.

Last June, about 40% of inmates in the nation’s largest county jail system were diagnosed with mental illness — 5,620 in all.

On Friday, a federal judge outlined benchmarks that the county must meet before May 15.

Under the plan, the county is required to achieve “substantial compliance” by 2024 — nine years after the settlement was reached in August 2015.

County attorneys have expressed reservations about meeting that goal.

U.S. District Judge Dean D. Pregerson said at a hearing Friday that he was concerned about the “revolving door” of inmates with mental illnesses who don’t receive discharge plans, including how they will receive medicine and therapy once released.

Last year, the number of inmates who died by suicide in L.A. County jails was the highest since the settlement, Assistant U.S. Attorney Matthew Nickell said at the hearing.

A spike in suicides in county jails was part of what led federal officials to seek the agreement.

Deputy Alejandra Parra, a public information officer with the L.A. County Sheriff’s Department, said the agency was unable to comment on ongoing litigation. Coral Itzcalli, a spokesperson for the county Department of Health Services, which provides mental health care in the jails, said the same.

He cited a 1997 federal report that found issues similar to those that inmates still face today.

“We’re really talking about 25 years of violating the rights of some of the most vulnerable people in our community,” Eliasberg said. “It is frankly disgraceful.”

Miriam Krinsky led a citizens commission that issued a seminal report on jail violence in 2012, before the federal settlement.

“There needs to be a louder outcry to underscore that removing people from their communities under the assumption that it makes us safer, when they don’t pose a danger to the community, they commit lower level offenses driven by mental health or substance use disorders, doesn’t make our community healthier or safer,” she said.

The federal settlement was reached under then-Sheriff Jim McDonnell, less than a year after he was elected amid scandals and mistreatment of inmates in the jails.

Alex Villanueva unseated McDonnell as sheriff in 2018 and has been in charge of the jails since then.

Mitchell, the federal monitor, who regularly inspects the county jails under the settlement, wrote in a damning report in September that initially, officials made meaningful progress. Now, he wrote, that progress has “slowed to a halt.”

The county has pointed to the substantial challenges of COVID-19, but Mitchell argued that was not an excuse.

The federal settlement required intensive mental heath treatment for jail inmates, but the county hasn’t provided the money to achieve those goals, Mitchell said in his report.

In recent years, L.A. County supervisors have made efforts to channel minor offenders with mental health needs into treatment and housing programs, rather than jail.

Inside the jails, conditions have worsened for inmates with the most serious mental illnesses.

In high observation units, inmates are locked in cells by themselves and let out only for very limited periods, Mitchell’s report noted.

When Mitchell’s team visited, some inmates were asleep and others were pacing back and forth in their cells.

Few were in a condition to acknowledge, let alone answer, questions posed by team members, the report said.