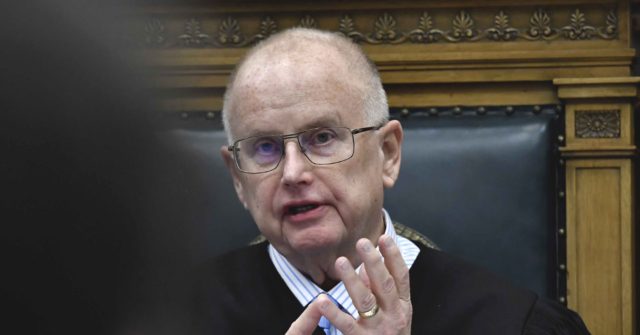 Judge Bruce Schroeder of the Kenosha County Court in Wisconsin announced Thursday morning that he had ejected MSNBC from further coverage of the Kyle Rittenhouse trial after a man claiming to be a producer allegedly followed a bus containing jurors.

Schroeder convened the court as the jury continued its deliberations for a third day in the trial, in which Rittenhouse faces two counts of murder, one count of attempted murder, and two counts of reckless endangerment after he shot three rioters, killing two, during last summer’s Black Lives Matter riots in the small Midwestern city in what he claims was self-defense.

According to the judge, a man named James G. (or J) Morrison, who claimed to be a producer for MSNBC, who said he was working for an MSNBC executive named Irene Byon in New York, was stopped Wednesday evening by local police as he was following the bus transporting jurors to and from the courthouse in his car.

The bus, the judge explained, has covered windows so that jurors will not see protests for or against either side in the trial as they arrive at the courthouse, and will not be intimidated or influences.

The judge acknowledged that there had been a statement by police, and that journalists had begun to ask about it.

Last night a person who is alleging to be affiliated with a national media outlet was briefly taken into custody and issued several traffic related citations. Police suspect this person was trying to photograph jurors. This incident is being investigated much further.

The judge explained that Morrison had driven his car through a red light as he followed the jury bus, and was stopped by local police. Morrison allegedly told police he had been following the jury bus on instructions from Byon, and had been “taken in” for further questioning.

While the matter was still being investigated, he said, MSNBC had been kicked out of the courthouse for the remainder of the proceedings. Judge Schroeder, who said the ultimate truth of the incident was not yet known, nevertheless called the incident an “extremely serious matter.”

On Wednesday, the judge had expressed his frustration with the media in general, saying they were spreading “misinformation” about the trial, about his rulings from the bench, and about the attorneys on either side of the case. He added that his experience had caused him to reconsider allowing future trials to be televised in his courtroom.