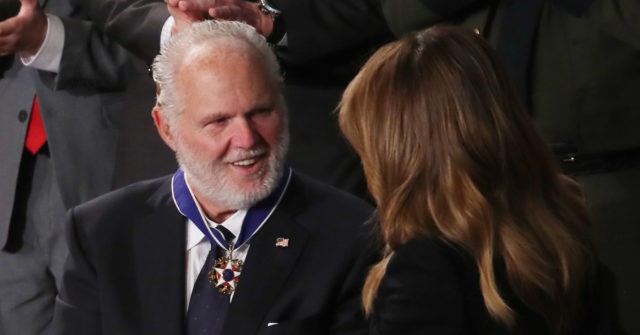 The late Rush Limbaugh would, every year, retell “The True Story of Thanksgiving” to his millions of listeners. This is the first year the country goes without the annual tradition, but countless Americans across the nation are continuing to keep the tradition alive.

During the program, Limbaugh expressed joy that “The True Story of Thanksgiving” is spreading across the country.

“The Real Story of Thanksgiving, going back to the very first early days of the Pilgrims arriving at Plymouth Rock, is that socialism failed,” he said, detailing the arduous conditions the Pilgrims faced the they landed in the New World, as detailed by William Bradford in his journal.

Limbaugh continued, getting to the crux of “The True Story of Thanksgiving.”

During that first winter — remember, they arrive in November — during that first winter, half of them, including William Bradford’s own wife, died of starvation, of sickness, exposure to the elements. Now we’re getting close to what you were taught in school. When spring finally came — and, by the way, writing that doesn’t do it justice. Spring didn’t just finally come. It was a survival. It was an act of survival that you and I cannot possibly relate to or understand.

American Special Forces can. Military people who’ve been trained can understand what the Pilgrims were — you and I can’t. We’ve never done anything like that first winter in the New World. They survived it. Spring finally came. They did meet the Indians, the Native Americans who were there, who did help them in planting corn and fishing for cod. They showed ’em where the beavers were so the beavers could be skinned for coats, other things. You animal rights people are not gonna like some of this story, but it happened.

But even at this, even with this degree of assistance from the Indians, the Native Americans, there wasn’t any prosperity yet. They had the Mayflower Compact. They had these laws they were living by, and there was no prosperity. And I wonder why. Now, this is important to understand here, folks, because this is where modern American history lessons end, with the Indians teaching the Pilgrims how to eat, how to fish, how to skin beavers, and all that.

That’s where it ends. And that’s the feel-good story. But that doesn’t even get close to the true story. You know, Thanksgiving is actually explained in some textbooks as a holiday for which the Pilgrims gave thanks to the Indians for saving their lives. It wasn’t that. That happened, but Thanksgiving was a devout expression of gratitude, the Pilgrims, to God for their survival, and everything that was a part of it.

Now, here’s the part that has been omitted. The original contract the Pilgrims entered into in Holland — they had sponsors. They didn’t have the money to do this trip on their own. They had sponsors. There were merchant sponsors in London and in Holland. And these merchant sponsors demanded that everything that the Pilgrims produced in the New World would go into a common store, a single bank, if you will. And that each member of the Pilgrim community was entitled to one share.

The Pilgrims established a commune, essentially. Forerunner of the communes we saw in the sixties and seventies out in California. They even had their own organic vegetables, by the way. Yep. The Pilgrims, forerunners of organic vegetables. Of course, what else could there be? No such thing as processed anything back then.

Now, William Bradford, who had become the governor of the colony ’cause he was the leader, recognized that this wasn’t gonna work. This was costly and destructive, and it just wasn’t working. It was collectivism. It was socialism. It wasn’t working. That first winner had taken a lot of lives. The manpower was greatly reduced. So William Bradford decided to take bold action, which I will describe when we get back.

He turned loose the power of the capitalist marketplace. Long before Karl Marx was even born. Long before Karl Marx was a sperm cell in his father’s dreams, the Pilgrims had discovered and experimented with what could only be described as socialism, and they found that it didn’t work. Now, it wasn’t called that then. But that’s exactly what it was. Everybody was given an equal share. You know what happened? Nobody did anything. There was no incentive. Nothing worked. Nothing happened.

Ultimately, Limbaugh continued, the Pilgrims introduced capitalism, opening the door for individual incentives, which proved to be a game-changer for the settlers.

“The lesson is — The True Story of Thanksgiving is — that William Bradford and his Pilgrim community were thanking God for the blessings on their community after the first miserable winter of a documented failure brought on by their attempt at fairness and equality, which was socialism,” he added.