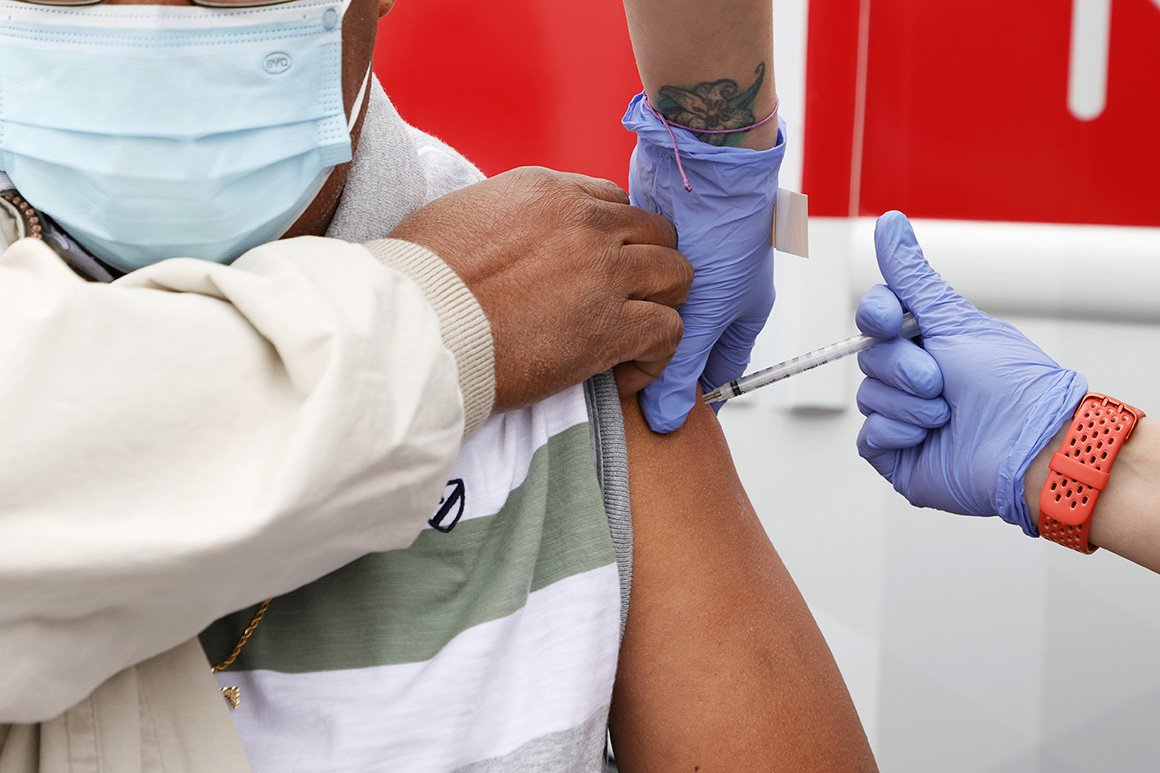 Both decisions hinged on the authority of federal regulators. The majority ruled that OSHA — which is part of the Labor Department — appeared to have exceeded the authority it was given by Congress, but not the Department of Health and Human Services in the health care worker case.

The court’s action on the business mandate punts that issue back to the 6th U.S. Circuit Court of Appeals. But the move signals that if the case returns to the high court, a majority of the justices will likely side with businesses and Republican-led states that sued to squelch the requirement, which would affect an estimated 84 million workers as the Omicron variant is driving up cases and straining health care systems.

Still, given the fast-moving nature of the pandemic, the Supreme Court’s interim actions take on added weight and it was unclear if the Biden administration would continue the legal fight.

“I am disappointed that the Supreme Court has chosen to block common-sense life-saving requirements for employees at large businesses that were grounded squarely in both science and the law,” Biden said in a statement on the broader rule.

States and employers must now take it upon themselves to implement their own vaccination policies, Biden said. In the meantime, he plans to continue to “advocate for employers to do the right thing to protect Americans’ health and economy.”

Because the administration issued the large-business mandate on an emergency basis, it expires after six months — at which point, the Labor Department must either replace it with a permanent standard or let it lapse. With less than four months left on the clock, that doesn’t give the White House much time to pursue a legal victory.

Labor Secretary Marty Walsh said: “OSHA will be evaluating all options to ensure workers are protected from this deadly virus…. Regardless of the ultimate outcome of these proceedings, OSHA will do everything in its existing authority to hold businesses accountable for protecting workers.”

The court’s conservative members wrote in an unsigned opinion that Walsh “lacked authority to impose the mandate. Administrative agencies are creatures of statute. They accordingly possess only the authority that Congress has provided.”

There was no basis for “withholding interim relief,” they said, declining to lift a stay on its enforcement.

“We are told by the States and the employers that OSHA’s mandate will force them to incur billions of dollars in unrecoverable compliance costs and will cause hundreds of thousands of employees to leave their jobs,” they wrote. “For its part, the Federal Government says that the mandate will save over 6,500 lives and prevent hundreds of thousands of hospitalizations. It is not our role to weigh such tradeoffs.”

The court’s three liberal justices argued that their colleagues were disregarding the input of public health experts in their decision.

“Acting outside of its competence and without legal basis, the Court displaces the judgments of the Government officials given the responsibility to respond to workplace health emergencies,” Justices Stephen Breyer, Elena Kagan and Sonia Sotomayor wrote in an unusual joint dissent.

In the health care worker case, the court’s majority wrote in an unsigned opinion that they “conclude that the [HHS] Secretary did not exceed his statutory authority in requiring that, in order to remain eligible for Medicare and Medicaid dollars, the facilities covered by the interim rule must ensure that their employees be vaccinated against COVID–19.”

In a dissenting opinion, Justice Clarence Thomas wrote that if Congress had wanted to grant the power “to impose a vaccine mandate across all facility types, it would have done what it has done elsewhere—specifically authorize one.”

He was joined by Justices Samuel Alito, Neil Gorsuch and Amy Coney Barrett.

Democrats condemned the conservative justices’ decision in the OSHA case as partisan.

“The Supreme Court’s decision to block OSHA’s emergency workplace standard undermines a 50-year-old workplace safety law and threatens OSHA’s authority to protect workers during a public health emergency,” House Education and Labor Chair Bobby Scott (D-Va.) said in a statement. “This is exactly the type of so-called judicial activism that Republicans once decried.”

Groups like the National Retail Federation — one of more than two dozen trade associations contesting the regulation — were quick to praise the court’s move blocking the OSHA rule, known as an emergency temporary standard.

“The Supreme Court’s decision to stay OSHA’s onerous and unprecedented ETS is a significant victory for employers,” the National Retail Federation’s David French said in a statement. “As NRF and other plaintiffs articulated in our briefs before the court, OSHA clearly exceeded its authority promulgating its original mandate under emergency powers without giving stakeholders the benefit of a rulemaking process.”

“NRF urges the Biden Administration to discard this unlawful mandate and instead work with employers, employees and public health experts on practical ways to increase vaccination rates and mitigate the spread of the virus in 2022.”

Pressing pause on the regulation’s implementation will aid them economically, the employers said.

The court heardarguments for and against lifting the stays on the rules in a special session just six days ago at which the court’s conservative members appeared sympathetic to challengers — while liberal justices seemed flabbergasted at the idea of preventing the rules from taking effect.

Numerous states and business groups are among those fighting the broader regulation, which requires employers with 100 or more employees to ensure workers are vaccinated against Covid-19 or submit to weekly testing and wear masks at all times while in the workplace.

The mostly GOP-led states say that the rule oversteps federal authority and that their governments should be the ones to regulate vaccination. Businesses argue that implementing the standard would cause them irreparable economic harm, including a loss of workers to smaller businesses not subject to the rule.

Both the OSHA standard and the health worker guidelines have been in legal limbo since the Biden administration issued them last year.

The OSHA mandate was initially blocked by the 5th U.S. Circuit Court of Appeals, but the 6th Circuit lifted the stay after it was chosen via lottery to hear a consolidated version of the various legal challenges to the mandate.

In the health care workers’ case, the Justice Department asked the Supreme Court to stop two injunctions against the mandate that were issued by U.S. District Court judges in Louisiana and Missouri.

Biden announced that requirement on Sept. 9 as part of a dramatic expansion of the administration’s bid to boost vaccination rates as it redoubled efforts to rein in the virus. Officials anticipated the mandate will affect more than 50,000 health facilities and 17 million workers.

American Hospital Association President and CEO Rick Pollack said in a statement that while the group “has consistently urged all health care workers to be vaccinated,” they “also recognize that a vaccine requirement has the potential to create additional workforce staffing issues, at a time when our workforce is already exhausted by the many demands of COVID-19.”

He called on the Centers for Medicare and Medicaid Services, an arm of HHS, to “ensure that compliance is measured in a thoughtful and careful way that recognizes current circumstances,” and on the administration to “work with us by providing the funding and other resources needed to pursue aggressive and creative strategies to bolster the health care workforce.”

After the 8th U.S. Circuit Court of Appeals turned down the Biden administration’s request that a temporary freeze on the mandate in 10 states be lifted, the 5th Circuit partially lifted a nationwide block on the mandate.

The bulk of the large-business rule was set to take effect earlier this week. Employers would have had until Feb. 9 to develop their testing strategies for the unvaccinated.

Litigation is also pending in other courts over other Covid-19 vaccination mandates imposed by the Biden administration, including ones for uniformed military personnel, federal workers and federal contractors. Those cases have yet to reach the Supreme Court.