Snow and ice to hit the South as far as Georgia : NPR 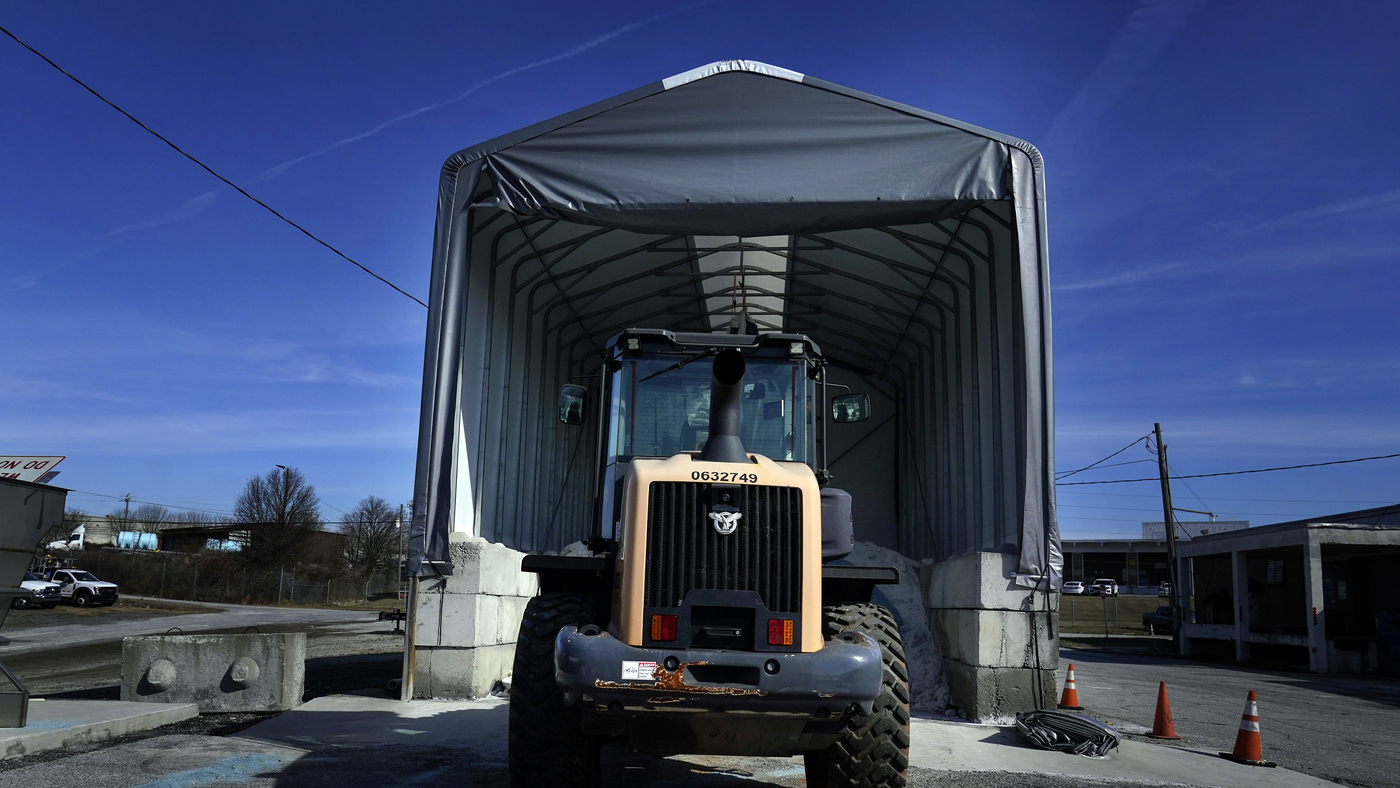 A tractor sits in front of a pile of salt used to create a brine that will help clear road of ice and snow ahead of a winter storm at the GDOT’s Maintenance Activities Unit location on Friday, Jan. 14, 2022, in Forest Park, Ga.

A tractor sits in front of a pile of salt used to create a brine that will help clear road of ice and snow ahead of a winter storm at the GDOT’s Maintenance Activities Unit location on Friday, Jan. 14, 2022, in Forest Park, Ga.

ATLANTA — Weather forecasters’ predictions of debilitating snow and ice as far south as Georgia sent parts of the region into a tizzy Friday with shoppers scouring store shelves for storm supplies and road crews trying to prevent a repeat of past wintertime debacles.

In Virginia, where a blizzard left thousands of motorists trapped on clogged highways earlier this month, Gov. Ralph Northam declared a state of emergency and urged people to take the approaching storm seriously. Some store shelves were stripped bare of essentials including bread and milk in North Carolina.

Trucks prepared to spray a briny mixture on roads to prevent icing across the region, and Travis Wagler said he hadn’t seen such a run on supplies at his Abbeville, South Carolina, hardware store in at least two winters.

“We’re selling everything you might expect: sleds, but also salt, shovels and firewood,” Wagler said from Abbeville Hardware. There, forecasters predict a quarter-inch (0.6 centimeters) of ice or more on trees and power lines, which could lead to days without electricity.

“There is a potential for very dangerous conditions caused by accumulations of ice and snow, which will likely result in power outages across the state,” he said.

The National Weather Service said from 2 inches (5 centimeters) to 5 inches (12.7 centimeters) of snow could fall as far south as northeast Georgia from Saturday evening though Sunday, and power outages and travel problems will be made all the worse by an additional coating of ice and winds gusting to 35 mph (56 km/h). Snow accumulations could reach 8 inches (20 centimeters) in the highest elevations.

The storm, after dipping down into the Southeast through the weekend, was so large it was expected to head into the Northeast while dropping snow, sleet and rain around the densely populated Eastern Seaboard.

In Georgia, Gov. Brian Kemp said the state was preparing “to the max” for the blast. He declared a state of emergency late Friday, saying the focus of concern was the northern part of Georgia from just above the east-west Interstate 20 route.

“Hopefully, the storm will underdeliver, but it could overdeliver. We just don’t know,” he said.

Parts of Tennessee could get as much as 6 inches (15 centimeters) of snow, forecasters said, and northern Mississippi and the Tennessee Valley region of Alabama could receive light snow accumulations. With lows predicted in the 20s across a wide area, any precipitation could freeze and make driving difficult.

A Georgia Department of Transportation response member looks at a brine truck tank being filled ahead of a winter storm at the GDOT’s Maintenance Activities Unit location on Friday, Jan. 14, 2022, in Forest Park, Ga.

A Georgia Department of Transportation response member looks at a brine truck tank being filled ahead of a winter storm at the GDOT’s Maintenance Activities Unit location on Friday, Jan. 14, 2022, in Forest Park, Ga.

On Friday, the fast-moving storm dropped heavy snow across a large swath of the Midwest, where travel conditions deteriorated and scores of schools closed or moved to online instruction.

A winter storm watch extended from just north of metro Atlanta to Arkansas in the west and Pennsylvania in the north, covering parts of 10 states including Kentucky, Ohio and West Virginia. Travel problems could extend into metro Atlanta, where about 2 inches (5 centimeters) of snow brought traffic to a slip-sliding halt in 2014, an event still known as “Snowmaggedon.”

At Dawsonville Hardware about 60 miles (97 km) north of Atlanta, owner Dwight Gilleland said he was already out heaters by noon Friday and only had five bags of salt and sand left.

“I think the pandemic has made people more anxious than normal,” he said.

The city of Winston-Salem, North Carolina, had to borrow workers from other departments to help treat roads ahead of the storm because COVID-19 had caused a shortage of workers, spokesman Randy Britton said. Even volunteers pitched in to help as the city stepped up its normal schedule of preparing for winter weather, he said.

“We feel real good about where we are,” he said. “We’ve checked the boxes.”

North Carolina Gov. Roy Cooper signed an emergency order and the administration urged people to stay at home after the storm hits. The state highway agency warned that labor shortages meant crews might not respond to problems areas as quickly as normal.

“We just don’t have as many people to drive the trucks or operate the equipment,” said Marcus Thompson, a spokesman for the North Carolina Department of Transportation.

Many schools and businesses will be closed Monday for the Martin Luther King Jr. holiday, which could help reduce travel problems along with temperatures that are supposed to rise into the 40s.

Pam Thompson, who owns Dillard House Stables in north Georgia’s Rabun County, was near the bullseye of the largest snow forecast. She was gathering feed and hay for about 40 horses in case the snow and ice doesn’t make a fast departure.

“We have snow every year up here in the mountains and it will be anywhere from 6 to 8 inches, and it’s usually gone pretty fast,” Thompson said. “What I’m seeing on the forecast is that it’s going to be really cold next week, so the snow may not go away as quickly as normal.”