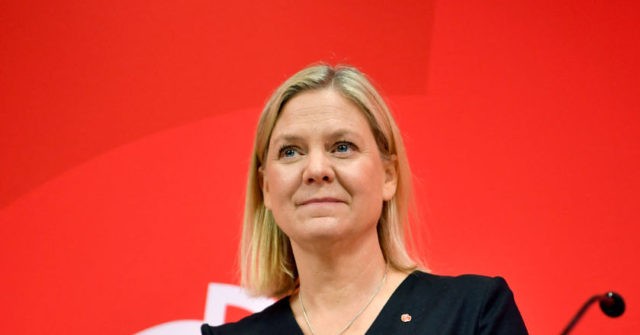 Sweden elected its first-ever female Prime Minister on Wednesday morning, but she resigned just seven and a half hours later after her coalition government lost a key budget vote.

Magdalena Andersson, leader of the Social Democrats, was selected in a Riksdag (Parliament) vote as Sweden’s 34th Prime Minister on Wednesday morning, replacing outgoing migrant-crisis era leader of the Social Democrat Stefan Löfven. Yet just hours later the Speaker of Riksdag announced the search for another new Prime Minister would begin after Andersson’s government collapsed before she’d even had chance to be sworn into the role.

The Budget for the Andersson government was up before Parliament Wednesday afternoon but failed to pass. The chamber instead elected to pass a so-called opposition budget written by right-wing minority parties, which had the government stayed it would have been forced to implement. The prospect of working to a budget that had been approved of by right-wing populists the Sweden Democrats was too much for coalition partners the Greens, however, who pulled out of the government in protest.

The withdrawal means Sweden’s Prime Minister is seen as no longer leading the government legitimately and therefore had to tender her resignation. Andersson said as much in her remarks Wednesday evening when she said, per Sweden Television: “For me, it is about respect, I do not want to lead a government where there may be grounds to question its legitimacy.”

Swedish newspaper Aftonbladet reported further comments when the outgoing Prime Minister said: “Of course, I fully understand that this appears to be messy. A party that this morning voted for a prime minister who formed a government with that party has now changed its mind.”

The numbers were always stacked against PM Magdalena Andersson — she only avoided having her selection as Prime Minister on Wednesday Morning blocked by just one vote, and the budget vote coming later that day looked likely to fail.

Sweden’s Centrist party, which had generally supported the left-wing Left-Green coalition in the past voted against the budget today, robbing it of the votes it needed to pass. This triggered the Green withdrawal from the failing government, and by the convention of the Swedish system, this means a new Prime Minister must be selected again.

The Greens for their part said the Centrist’s refusal to back the government today left them “surprised and outraged”.

A statement from the Speaker of the Swedish Parliament Wednesday evening said “The Speaker will now contact the party leaders to discuss the situation and will provide information on how the process is to continue on Thursday afternoon.”

Regardless, it may be that Andersson will be re-selected as the next Prime Minister, and despite their withdrawal from the government today the Greens have said they would back Andersson to lead again when the next leadership vote comes. As SVT reports: “In a new prime ministerial vote, Magdalena Andersson thus looks to be re-elected to the post.”

For now, as it stands, Sweden’s long-time left-wing leader Stefan Löfven appears to remain as Prime Minister as a caretaker as the Andersson government collapsed before it was sworn in.