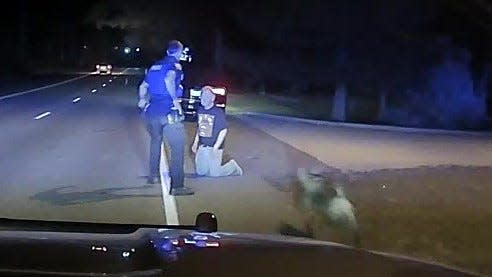 The release of the footage comes about a week after Brennan’s attorneys announced their client had reached a $325,000 settlement agreement with the town and Patrolman Jonathan Rogers, who had released the dog during the encounter on Sept. 20, 2019.

Brennan was 63 at the time of the incident and ran Yorkids Pediatrics. Brennan suffered multiple injuries, including dog bites that his attorneys said required months of follow-up and wound care.

The 21-minute video, which was released in response to a public records request from Seacoast Media Group, includes audio and dashboard camera video. There was no body-worn camera used during the encounter, Burns said.

Rogers pulled over Brennan for allegedly flashing his high beams. The video shows Brennan stepped out of his vehicle before Rogers’ cruiser had fully stopped.

As Brennan walked toward the police cruiser, Rogers shouted at him to put his hands up. Brennan complied at first, but he continued walking while Rogers yelled three times for him to stop.

Brennan stopped for a moment with his hands raised, then he dropped them and turned back toward his own vehicle. Rogers left his cruiser and approached Brennan, telling him to stop moving. Rogers had his gun drawn and pointed at Brennan.

Brennan turned again toward Rogers, who repeatedly warned that he would sic the K-9 on him if he did not turn around and comply.

No more than 40 seconds elapsed between when Rogers’ patrol car came to a stop on scene and when his K-9 can be seen in the video running at Brennan.

While Brennan was on the ground with the police dog on top of him, Rogers told him to get on the ground again and put his hands behind his back. Brennan rolled onto his stomach as the dog appeared to continue biting down on his leg. At the same time, Rogers told Brennan to stop resisting.

Rogers was on the ground atop Brennan while the K-9 continued to subdue him. Rogers eventually pulled the dog off of Brennan, who remained on the ground with his hands behind his back.

The K-9’s engagement with Brennan lasted about 80 seconds.

Several officers and an ambulance arrived to assist Rogers and tend to Brennan’s injuries. Rogers told Brennan he was under arrest for refusing to submit to arrest or detention.

Rogers can be heard telling the other officers about Brennan’s injuries.

“He looks like I beat the f—ing s— out of him. I really didn’t,” Rogers said. “I just released the dog.”

Emergency medical technicians told Rogers one of Brennan’s eyes had bled and he couldn’t see out of it. Rogers told the EMT that he had smacked Brennan with his hand in the area that the eye was bleeding.

When an ambulance arrived 13 minutes into the interaction, Rogers informed the responders Brennan’s leg had been chewed and was bloody.

Brennan’s interaction with police, the K-9 and EMTs lasted about 16 minutes before Brennan was placed in an ambulance.

Brennan was charged with refusing to submit to arrest, but the charge was dismissed after six months, according to York County District Attorney Kathryn Slattery.

The DA’s office is not involved in disciplinary investigations against police officers, Slattery said.

An opportunity to do better next time

At the time, York police said the response by Rogers was warranted because, they said, Brennan had been an aggressor.

Brennan’s attorney, Alexander Spadinger of Shaheen and Gordon, said the settlement makes clear that initial attempts by York police to paint Brennan as the aggressor were untrue. They said Brennan was in the process of getting down on the ground to surrender when the K-9 was released. The decision to release a trained police dog was neither reasonable nor necessary, Spadinger added.

Brennan suffered multiple injuries as a result of the dog bites that required months of follow-up and wound care treatment, including puncture wounds to both legs and his left arm, as well as a chest wall injury and trauma to his left eye, according to the statement.

“As a result of this case, Dr. Brennan is hopeful that the York Police Department will take steps to ensure that next time one of its officers is faced with a situation like this, they turn first to their de-escalation training before resorting to physical force,” Spadinger added.

In contrast, Burns said the settlement was decided by the town’s insurer and does not reflect wrongdoing by York police.

“The settlement is because we have insurance so that the insurance company dictates anything that has to do with financial risk to them. They make the decisions, they pay that settlement. The town does not pay that,” Burns said. “It does not cost the taxpayers anything, other than if the insurance premiums go up.”

‘Didn’t have to be this way’: Wentworth-Douglass COVID-19 care nurses pushed to the limit

Burns said Rogers still works for York police. Burns declined to comment on whether the town believes the settlement was fair.

Burns said the incident between Rogers and Brennan triggered an internal investigation by the York police command staff that did not lead to any disciplinary action.

Rogers was told not to use such vulgar language, but that was it, Burns said.

No changes have been made to YPD use of force and dog policies in response to this incident, Burns said.

Acting Police Chief Owen Davis said York police conducted a “thorough investigation” that found Rogers’ actions followed all department operating procedures and used “the appropriate amount of force necessary to gain control of the situation while ensuring the safety of both parties.”

In the statement, Burns said police have a difficult job.

“I’m often told I have a difficult job, and that people wouldn’t want my job. I look at the job our Police Officers do … and think, my job is easy by comparison,” Burns said. “Police Officers are kind and caring, and provide all manner of public service to our residents. However, at any moment they are prepared to jump into action to keep our community safe.”

Police work is neither pretty nor pleasant, Burns added, and they are often called upon to make on-the-spot, life-altering decisions.

“Their work, however, is absolutely necessary to protect the quality of life we enjoy in our community,” Burns said.

Despite the settlement, Kasia S. Park, the attorney who represented the town and Rogers, continued to deny any wrongdoing on the part of Rogers, Sgt. Brian Curtin and the York Police Department.

“This was not a routine traffic stop,” Park said. “Dr. Brennan jumped out of the car before Officer Rogers even stopped his cruiser and started heading towards Officer Rogers. Officer Rogers did not know the identity of the driver at the time, did not know why the driver was jumping out of the car or if he was armed, or if there was anyone else in the car. There were three civilian witnesses who came forward describing Dr. Brennan as being the aggressor during the encounter.”